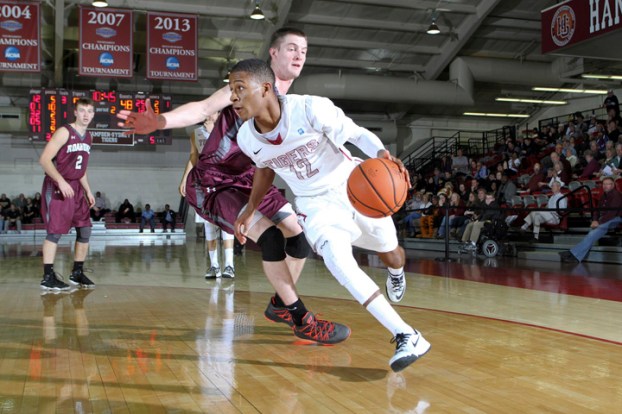 HOW IT HAPPENED: The game was back and forth with nine ties and eight lead changes. H-SC led 31-28 at halftime and opened up the second half with a 39-32 advantage two minutes in, but JHU scored seven straight to tie the game at 15:47. The Tigers led 56-54 at the 7:20 mark and extended it to 61-54 with 2:45 to play in regulation. Kyle Doran tied the game with three seconds left, and Murray’s 1/3 court three-pointer at the buzzer beater banked off the backboard to sent the game to overtime.Following two Andrew Evans free throws, H-SC led 68-64 at 2:41, but JHU tied the game at 70-70 with 61 seconds remaining. The Tiger defense held JHU to just one field goal attempt the rest of the way as Evans and Guilherme  Guimaraes combined to go 5-for-6 on free throws in the final 37 seconds.

STATS OF THE GAME: H-SC held another opponent to under 40 percent shooting, limiting the Blue Jays to a 36.4 percent performance.

UP NEXT: Hampden-Sydney travels to Randolph-Macon on Wednesday for a 7 p.m. contest.

The Farmville Recreation Department will host a Pickleball tournament at the Firemen’s Sports Arena on Saturday, Jan. 23. All ages... read more