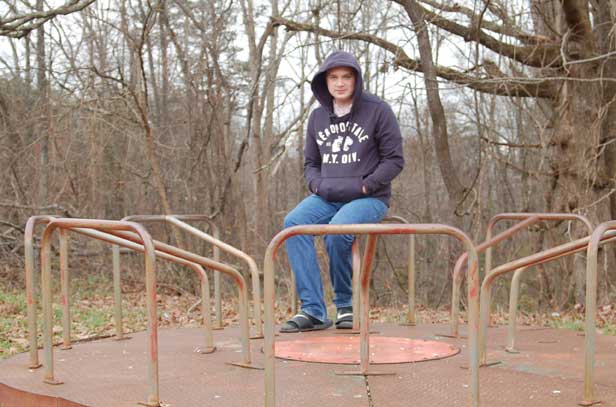 Local teen Sean Murray presented a plan to renovate a neighborhood playground in Pamplin to the town council in November. To date, Murray’s Restore Pamplin Playground fund has raised over $1,000.

Child’s play is generally defined as a trivial matter; 16-year-old Sean Murray doesn’t see it that way. Disturbed by a dilapidated playground near his home, Murray went to Pamplin Town Council for approval to renovate it. Since November he has raised over $1,000.

“I was sitting on the merry-go-round with some friends,” Murray said. “We all decided that the playground needed some work.”

“Some,” in this case, is an understatement. All that remains of a play area near the abandoned Pamplin School are the bare bones of the past. Today youngsters make do with a rust-covered merry-go-round, a vine-covered jungle gym and parallel bars, swings with no seats and a slide that had seen better days.

“In 1908 an eight-room frame building was built on the present site of the now closed Pamplin School,” local historian Edwina Covington reported.

The playground equipment behind the old school is obviously from that era — the merry-go-round is typical of early-1900 models.

Despite its dilapidated state, the playground has

“That’s where all the children in the neighborhood go to play,” Murray said.

Shorty after that day on the merry-go-round, Murray decided to do something about the playground. He went to the Pamplin Town Council meeting in November to ask permission to restore the playground and presented a projection of the cost.

“I estimated the cost by visiting Lowe’s and Home Depot,” Murray, who plans to major in business, said. “It’s around $4,000.

“His teenage friends are looking to assist him when the time comes,” his mother Norine said.

The council unanimously approved Murray’s plan, and Vice Mayor Robert Mitchell sent out a letter stating, “We are very fortunate that a teen in this community is showing great interest in this project.”

Murray’s family has lived in Pamplin for 23 years. The Town of Pamplin, with a population of 220, straddles two counties — half the town is in Prince Edward, the other half is in Appomattox.

According to local residents, Murray is a part of what makes the community great.

“He is always doing something for this community and trying to help it,” Pamplin resident Tammy Stalker said.

Murray held his first fundraiser the weekend after Black Friday and netted $365. A sale the following weekend brought another $125.

“It did give us a good kick off,” Murray said.

“The items people are donating are good quality things,” his mother said.

After the Appomattox Times-Virginian reported Murray’s visit to the Pamplin Town Council in November, WSET in Lynchburg, filmed a segment on the teen’s project for the evening news.

“I was really surprised when they showed up at my yard sale,” Murray said.

“I got all choked up when I saw it,” Murray’s mother said.

Although Murray is modest about his television appearance, he’s proud that his fund has reached the $1,000 mark. Another sale and stew is set for Feb. 6 at the Pamplin Depot.

“Changing it (the playground) now is making a change for the better,” Murray said.

The local teen’s project has also changed the definition of child’s play. In the eyes of the Pamplin community, restoring the town playground is anything but trivial.

For more information on the playground project, or to donate, email restorepamplinplayground@gmail.com or write Sean Murray, P.O. Box 1054, Pamplin, Va., 23958.

On Friday, the Town of Farmville dedicated the Dr. Erica Geary Dog Park at First and North Virginia streets in... read more