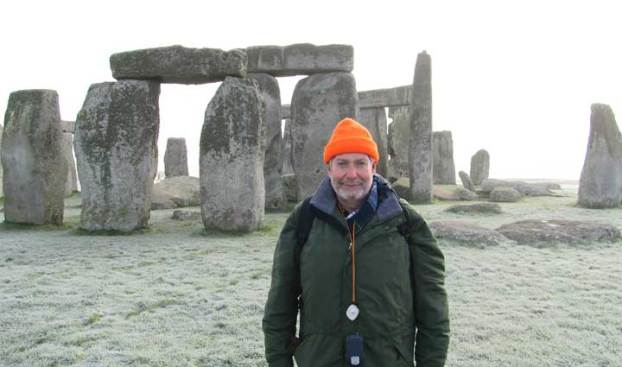 Out with the old – in with the new

The celebration of New Year’s links the ancient monument of Stonehenge in England to a pile of carefully placed rocks in Buckingham County.  Both are evidence of New Year’s Eve parties held long ago.

Most societies saw a new year as an occasion to start afresh and put bad things behind them. Usually ceremonial activities were linked to times when floral, animal and solar patterns appeared or when animals migrated or the moon appeared at a specific place.

Chinese New Year occurs on the “darkest” moon phase of the coldest month, from Jan. 21 to Feb.  21. The Chinese set off firecrackers to scare away the bad old year — where we got the idea for noisemakers at the stroke of midnight!

Ancient Romans had a god named Janus (January’s namesake) with two faces — one looked to the future, the other to the past.  Janus sat under an oak tree in winter to admire a green-berried plant in the limbs — mistletoe. Today we place mistletoe above a doorway, honoring the promise of returning fruitfulness in the spring, which we symbolize with a kiss. 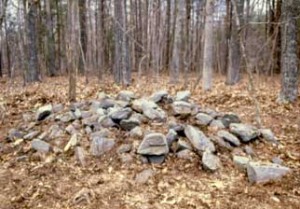 At the Jordan Site in Buckingham County, 33 stone mounds mark the spot where prehistoric Indians kept track of the seasons.

Long before the Ancient Romans, people in England had an elaborate “New Year’s Eve party.”  About 5,000 years ago they constructed a huge circle almost a football field in size of stones, about 25 feet tall. The stone circle, studied carefully by archaeologists for 300 years, is Stonehenge.

Stonehenge was built of stones from a quarry 90 miles away — no stones were found locally.  How these huge stones were moved remains a mystery – perhaps they were rolled on logs.

The builders of Stonehenge laid out stones in a  circle, aligned so that the sun’s rays fell on different stones on different days of the year — a prehistoric calendar!  The most important was the darkest, coldest day — the winter solstice at the end of December.  The next day rays of the sun changed by a fraction of an inch. That meant each day would be slightly longer and warmer and spring would come again.  You can imagine the party these early farmers threw when they knew they would be able to grow another crop. Yankees in New England reading “The Old Farmer’s Almanac” and ordering spring garden seeds are following the same ancient pattern!

Farmville has its own version of Stonehenge on a hilltop in Buckingham County — archaeological site 44BK213, the Jordan Site. Artifacts discovered at this prehistoric Indian ceremonial site by Longwood Archaeology Field School students show that Virginia Indians were on this hilltop 1,000 to 2,000 years ago.

The artifacts do not suggest Indians were living in a village or hunting basecamp. What was found was a series of 33 stone mounds inside a stone-walled rectangle, 400 by 300 feet — twice the size of a football field. The walls are a rim 6 inches tall, and each stone, the size of a basketball, could have been moved by one person. No doubt stones were moved to the hilltop from a streambed circling the hill.

There are eight similar archaeological sites in Alabama, Georgia, North Carolina and Tennessee, and archaeologists have concluded that stonewalls and mounds may have been a calendar like Stonehenge. The 33 stone mounds (there are different numbers of mounds at each site) cast shadows of various lengths and in various directions as the sun moves.  By watching daily changes in the shadows, the seasons of the year can be followed.  You would know when to plant crops, hunt, gather wild foods, expect the first or last killing frosts of the year — and when to celebrate the end of one year.  In short, you knew when to plan for New Year’s Eve!

Calendars show us what to do each season as it arrives.  So do not worry if you have already started eating fattening snacks, resumed watching too much television, or failed to start saving money for a rainy day!  You see, in a year we’ll all meet at Stonehenge, the Jordan Site in Buckingham County or a neighborhood New Year’s Eve party and try it all over again!