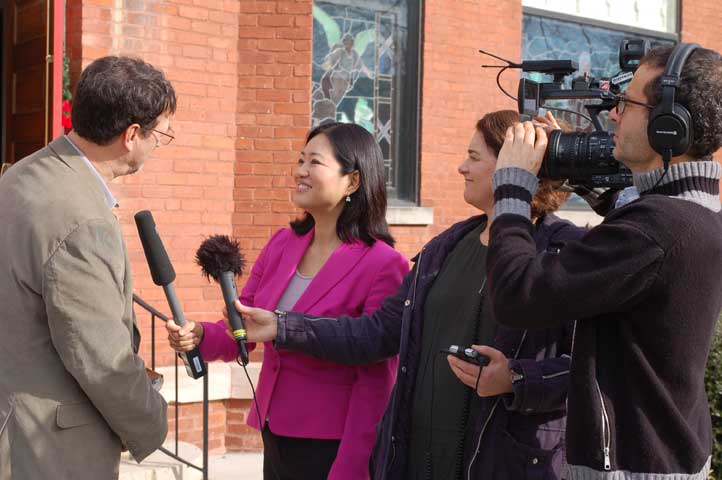 In an attempt to shed light on the U.S. electoral system and how much it costs to run for office in America, the British Broadcasting Corporation’s (BBC) World Service Radio is using Virginia’s Fifth Congressional District as a guinea pig, posing a hypothetical candidate for Congress.

The fictional campaign run is part of a documentary the BBC is putting together to show how American campaigns differ from those in other nations around the world.

BBC staff were in Farmville recently to talk to residents and voters about American politics — gathering interviews and sound bytes for the story.

“For reasons of BBC editorial non-partisan bias policy, Linda [Yueh] is hypothetically running as an independent [candidate],” said Julie Ball, the producer of the documentary.

“The programme will be broadcast in the new year on the World Service, which is rebroadcast on NPR in the U.S. and the network has around 44 million listeners globally,” Ball said.

“We’re trying to show a global audience how a U.S. election is funded and where the money goes,” Yueh said, standing outside the Farmville United Methodist Church waiting to catch parishioners after service.

“The way to do it is hypothetically running as an independent [in] the Fifth District just to help people see this is what my campaign team would cost me and what they say what I have to do — give a stump speech,” she said. “I have to go and meet with voters, I have to call people and ask for money. So the kind of mechanics of how it’s actually done.”

Yueh, a U.S. citizen, economist and BBC broadcaster, said that in no other country in the world “do you see this amount of money washing around in politics.”

When asked why the BBC selected Virginia, she said, “Virginia is a super swing state. It means it’s very important in the presidential race. Farmville, of course, has a great history. It’s so representative of the southern part of Virginia … And, of course, you’re hosting the only vice presidential debate next year. So we’re also trying to tie what I do to the overall picture of the U.S. presidential elections which lots of people are really interested in internationally, not just in the United States.”

“We started off with a campaign manager, who was 24, Zachary Worrell,” Ball said, noting his involvement with the David Brat and Eric Cantor races.

All along the way of hiring and working with consultants in managing the fictional campaign, the team has been adding up the costs.

“We have to go back and take stock obviously of what everyone’s told us to kind of make an assessment,” she said.

Yueh spoke to Mary Ann Dudley, a public school teacher, who said she was neither a Democrat nor a Republican when asked if she identified with a political party.

“I can make a living and I enjoy my job,” Dudley told Yueh. She said she’d probably never give money to a political campaign.

“Your stand on education,” Dudley replied when asked what would make her vote for Yueh.

The BBC team, which included Yueh, Ball and a cameraman, also attended the Republican Advance in Hot Springs before coming to Farmville.

Yueh planned on meeting with a digital strategist as well.

The program will air on Feb. 5 and will be available as a download and podcast at www.bbc.co.uk/worldserviceradio.