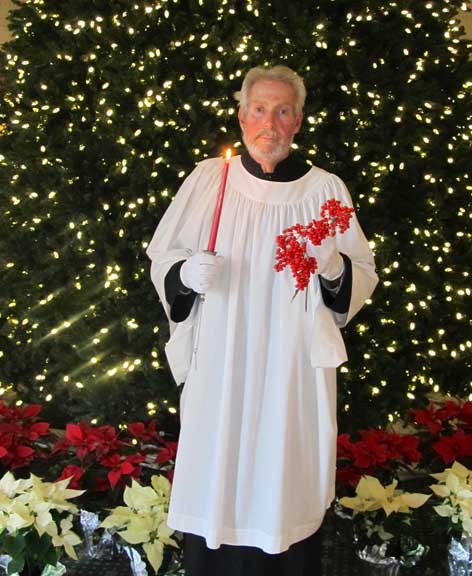 Dr. Jordan displays traditional symbols of Christmas that include a Longwood tradition, the Rotunda Christmas tree.

The Christmas tree: mystery and magic

Once upon a time, a long time ago, an evergreen tree was brought into a house. We don’t know exactly where that house was, but we do know it happened in the deep mid-winter at the winter solstice, shortest day of the year. That first fir, pine, cedar or spruce must have been magical because people have been doing the same thing ever since.

People brought evergreen trees into their homes at Yule month, coldest of the year, to reassure themselves that nature’s life was not altogether dead under winter’s ice and snow and that spring would come again. The evergreen tree in the home, remaining bravely alive through the period of nature’s “death,” was a symbol of this promise.

The fact that the decorations on the Christmas tree traditionally are round in shape (in the olden days think apples, oranges, pears, nuts, glass balls) remind us of the fruit of summer to come.

As an archaeologist I study events of the past, and the Christmas tree is a very important part of our past. As far as we can tell the home of that first Christmas tree was in the Rhine River Valley in Germany. The first mention of such a tree was in 1521, and by 1605 trees are described as being decorated. America added a new feature by setting up trees not only in family homes but also in public places like markets, churches and parks.

In Farmville we follow this ancient custom with the Grand Illumination of our town tree at High Bridge Plaza (first time this year), the tree in Centra Southside Community Hospital (began in 1928), trees in scores  of churches (starting shortly after the Civil War) and the Longwood tree in the Rotunda (first lit in 1887).

The evergreen tree did not go into homes and buildings alone — two plants accompanied it. Both carried symbolically carried the promise of summer’s warmth at this dark time when, as the carol says, “the earth is frozen hard as iron and water like a stone.” The first is English holly with berries “red as the sun” while outside “snow piled on snow.” The second is the poinsettia, native to Mexico, and used at Christmas because its red leaves resemble the Star of Bethlehem. It was named for Dr. Joel R. Poinsett, U.S. ambassador to Mexico 200 years ago. Upon his return to South Carolina in 1829, he brought poinsettias with him where they flourished.

Another wonderful symbol of Christmas — candles in windows — traveled to the United States from Ireland in the 1850s. The flame of the brave little candle shining through the dark winter night is an invitation for those outside to come in.

There is a place in Farmville where all these symbols are brought together in the most appropriate way — Longwood’s Rotunda. Here the Yule symbols encounter a true “Christmas Queen” who “lives” in the Rotunda ��� St. Joan of Arc. The sculpture of Joan of Arc came to Longwood in 1914, so our Joan has seen 101 Christmas trees illuminated beside her. Joan of Arc was born on Jan. 6, 1412, called “Old Christmas” in England. It is the 12th day of Christmas counting from Dec. 25. Remember the carol, “on the twelfth day of Christmas my true love sent to me.” Legend states that on the night Joan was born farm animals in the French village sang her lullabies in human voices. She grew up to give her life, burned at the stake, to save her country from invaders. Those animals, like the ones in the manger in another village on a winter night, must have known something.

In a short time we and our particular trees and decorations shall pass on, giving place to those who will come after us. But the spirit of these that we know and love — trees, holly, poinsettias, candles — shall remain. This season, these symbols and this place are magical because they go with us wherever we travel and will remain always at this place we call home.

The legend of the Yule Cat; ‘tidings of great joy’

“He gave a wave of his strong tail, He jumped and he clawed and he hissed. Sometimes up in the... read more