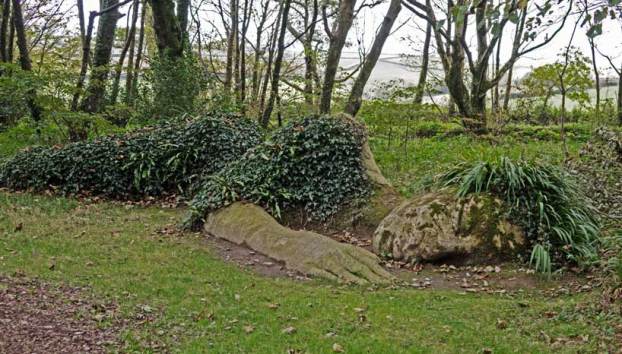 The Mud Maid, part of the lost Gardens of Heligan must not be disturbed!

If you read Frances Hodgson Burnett’s novel “The Secret Garden” when you were a child, then you know all about the power and magic of discovering a hidden garden and restoring it. There is such a garden in Cornwall, a genuine secret garden that was lost for decades, hidden away in Mother’s nature’s cocoon of vines and brambles.

Welcome to the Lost Gardens of Heligan, complete with a secret door to a secret room — a two seat thunder box — with a motto etched on one of the walls: Don’t come here to sleep or slumber and signed in August 1914 by members of the garden staff two days before Britain declared war on Germany. Twelve men left to join the war effort; only three returned.

Heligan was the home of the Tremayne family for more than 400 years. Over a period of nearly 200 years, the gardens were developed by family members who were avid collectors of exotic plants and regularly incorporated them into their gardens. And so by the early 1900s, Heligan had a network of riding paths; a rockery; flower gardens; a pineapple pit; a melon garden; glass houses for growing peaches, grapes, and citrus; vegetable and herb gardens; masses of rhododendrons; a crystal grotto; a Japanese garden; an Italian garden; huge plantings of Himalayan flowering dogwoods and hydrangeas; and even a jungle garden.

World War I brought massive social changes. The staff of large country estates went off to fight in the war, and many never returned. Many country estates were broken up, houses and land were sold, and extensive gardens became too difficult to maintain. Heligan was fortunate — the gardens just went to sleep. In 1990, after a devastating hurricane, tiny pieces of the garden were uncovered and exploration began in earnest.

Since then, glass houses have been uncovered and restored. The Italian garden has been returned to its former grandeur, complete with the same plantings and statues. The pineapple pit is once again being heated with composting horse manure and is producing what must be some of the most expensive and labor-intensive pineapples ever grown. Visitors can amble along the riding paths or wander through woodland gardens in search of the Giant’s Head, the Grey Lady and the famous Mud Maid. Most of us would merely have an unsightly stump removed; here it’s been turned into a grinning giant’s head, the height of Victorian garden whimsy. The larger than life Mud Maid has a crown of leafy wood sedge for hair and a gown of ivy.

Most amazing of all is the jungle garden, originally an ever evolving place where the owners could place exotic plants collected from all over the world. The jungle garden is complete with bamboo tunnels, banana plantations, giant rhubarb, huge tree ferns, exotic gingers, an enormous New Zealand yew, and Wollemi pines. How can this be? Well, parts of Cornwall have an especially mild, almost sub-tropical climate, and the jungle garden is in a very steep valley five degrees warmer than the northern part of the estate.

The jungle garden is built around a complex system of pipes and drains that carries water from the northern gardens to four interconnected lakes. Each lake has its own unique grouping of giant plants. Just for fun, there’s a swinging Burmese rope bridge that’s about 100 feet long and high above the valley floor. Foot traffic across the bridge is one way; start across and lose your nerve and you’re out of luck. You just have to keep moving.

Sometimes massive, clearly labor-intensive gardens make me uncomfortable. They’re too perfect and almost otherworldly. Heligan definitely is another world, but that’s part of what makes it so special. If you get a chance to visit the Lost Gardens of Heligan, you should go. Find the Mud Maid, check out the heritage breed sheep and pigs, and dare yourself to walk across that swinging bridge. When you’re totally overwhelmed and can’t smile anymore, stop by the tea room for a pot of tea. Plan a second visit — because you’ll need it.

Happy birthday to Myrle Gibson of Covington and mother of Fern Dunnavant of Dillwyn and T. J. Waycaster of Powhatan... read more