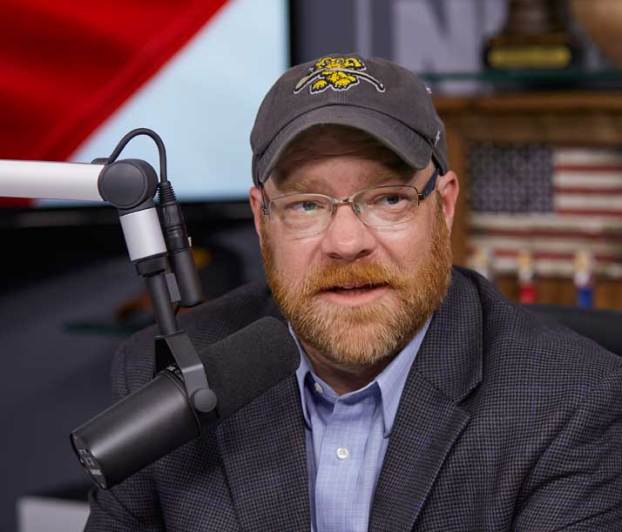 Q: Is it true that a National Rifle Association radio show originates from Farmville?

It should be no surprise to area hunters and gun owners that Farmville has a strong National Rifle Association presence. But it may surprise some to know that Farmville is host to a studio for NRA News, headed by news personality Cam Edwards.

Announced and opened in 2014, the studio is the second operated by NRA News, the anchor station in Washington, D.C. Advertised as “located in the heart of middle America,” Farmville was chosen because of the strong community presence of NRA members, hunters and gun enthusiasts in the area, according to Edwards.

“We’ve long recognized that much of the news we cover takes place beyond the Beltway in ‘real America,’ and that’s where our audience lives too,” said Edwards. “We do have a studio just outside of D.C. as well, so between the two I feel like we’re able to give our viewers and listeners a unique perspective not offered by other media outlets.”

Content produced in the NRA News Farmville studio largely centers on “Cam & Company,” a live daily broadcast hosted by Edwards and focused on 2nd Amendment news and issues. The show features Edwards interviewing NRA leaders, public figures, journalists and congressional leaders, as well as talking about topics ranging from current events to gun ownership. “Cam & Company” also aired as an hour-long weekday news show on The Sportsman Channel, running for two-and-half years prior to its cancellation in June.

Edwards has hosted the show since it debuted on NRA News in 2004. He previously worked as a reporter in Arkansas and Oklahoma. The three-hour radio show remains one of the standbys of NRA News, airing weekdays from 2 p.m. to 5 p.m. ET on NRANews.com and on SiriusXM satellite radio on Patriot Plus from 9 p.m. to midnight anbd on The Patriot from midnight to 3 a.m.

Edwards moved to Farmville from D.C. in 2012 prior to the launch of the local studio, and he lives on a 40-acre farm outside of town. He also hosts a weekly podcast on TheBlaze Radio Network called “40 Acres & a Fool,” where he talks about topics ranging from farming to parenting, and occasionally about life and events around Farmville. He also writes columns for websites such as Breitbart.com and The Federalist. He recently co-authored a book with Jim Geraghty titled Heavy Lifting: Grow Up, Get a Job, Raise a Family, and Other Manly Advice, which was released in October.

“We love the area here.  We have a small farm and raise hogs, chickens and goats at the moment, plus our small garden plot,” said Edwards. “We love our land, but we love the people we’ve met even more. There are so many hunters, gun owners and NRA members here that we feel right at home.”

Locally, Edwards and NRA News have been involved with the Heart of Virginia Friends of NRA dinner, which raises money for things like 4-H Shooting Sports and the Boy Scouts, as well as supporting local law enforcement.

As for future plans, Edwards is hopeful about a greater role in the community.

“The folks in Farmville have been great neighbors, and I hope that we’re another unique addition to a great small town on the move,” said Edwards. “I think the upcoming vice presidential candidate debate is going to be a great opportunity to highlight the town, and I’m really looking forward to being a part of the hometown media coverage.”

Shentel, which provides cable television service for Farmville, says it will be forced to drop the suite of channels owned... read more