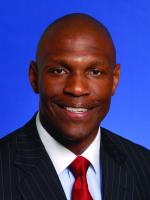 The NCAA will recognize six former student-athletes with the NCAA Silver Anniversary Award for their collegiate and professional achievements, including Hampden-Sydney College President Chris Howard.

The Silver Anniversary Award annually recognizes distinguished individuals on the 25th anniversary of the conclusion of their college athletics careers.

Representatives of NCAA member schools and conferences, along with a panel of former student-athletes, select each year’s recipients.

The 2016 recipients are Howard, Abby Cheng, Joé Juneau, Russell Maryland, Dikembe Mutombo and Steve Smith. The NCAA will recognize the honorees at the Honors Celebration during the 2016 NCAA Convention on Jan. 15 in San Antonio.

While in college, Howard excelled on the football team, leading the U.S. Air Force Academy to back-to-back bowl games in 1989 and 1990, including an upset victory over the Ohio State University in the 1990 Liberty Bowl.

His academic achievements were equally impressive, including two Academic All-America honors, an NCAA postgraduate scholarship and the 1990 Vincent DePaul Draddy Trophy (now known as the Campbell Trophy), which is the highest academic award in college football.

He also earned a Rhodes Scholarship in 1991, and went on to earn a master’s degree with distinction from Harvard Business School and a doctorate at Oxford University.

He became an Air Force lieutenant colonel and served in Afghanistan in 2003, where he was awarded the Bronze Star.

While on active duty, Howard served as an intelligence operations and plans officer with the elite Joint Special Operations Command.

He currently serves as president at Hampden-Sydney College, which has improved 17 places in the U.S. News and World Report collegiate rankings under his leadership. Howard is on the NCAA Division III Presidents Council.  He is a member of the national council of advisors to the Center for the Study of the Presidency and Congress, and a member of Virginia Gov. Terry McAuliffe’s Commission to Ensure Integrity and Public Confidence in State Government.

The Prince Edward County School Board is considering a request to advertise all school coaching positions internally and to the... read more