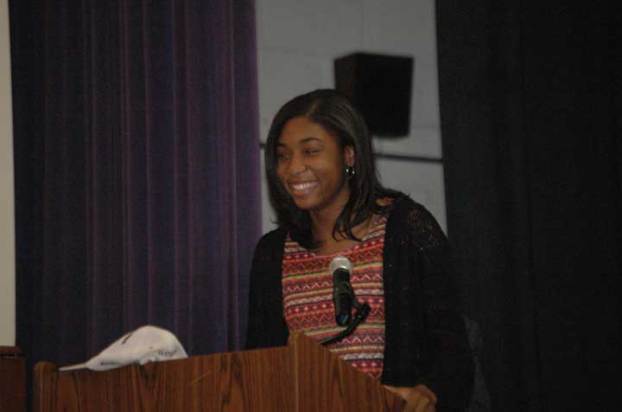 Not many high school seniors can say that the marching band played in their honor in front of hundreds of their peers, but Diamond Boxley can.

After the band played and PECHS Principal Zoltan Kerestely noted how proud the school system was of Boxley, her current coach, Janet Green, gave a heartfelt speech about Boxley’s accomplishments.

“Diamond has also made an impact on Prince Edward,” said Green. “As she moves on to play in Virginia and nationally, she will open up her world and she will also represent Prince Edward in the best way possible.”

Green went on to say how Boxley being an Eagle athlete will change the school’s future.

“Through her success and the success of our other athletes, Prince Edward will become known as a school that produces students who work hard, set the bar high and — especially in Diamond’s case — are able to juggle their many interests to achieve a higher standard.”

Boxley’s soon-to-be coach at VCU, Jody Rogers, could not make the celebratory event but sent a few words to be read that explained why Boxley was a player she wanted on her team.

“Diamond brings to VCU a special blend of leadership, discipline and effort difficult to measure — but essential to success,” Rogers said.

“She brings a first-rate work ethic to our athletic and academic team goals. Her athleticism and explosiveness will make her a force at the middle blocker position, and enhance the level of competition in our gym … She’ll do great things here.”

After a slide show presentation of action photos, Boxley walked up to the podium to thank God, her parents and siblings and her friends for helping her throughout high school, and then thanked all of her coaches and teammates for helping her during her volleyball career thus far.

“Without your support, without your drive for excellence and without your challenge for academic success, I know that I would not have achieved all that I have today,” she said.

Boxley will attend VCU in January.