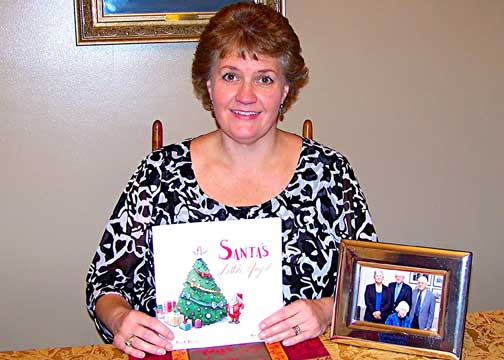 “Santa’s Little Angel” by Rosa C. Thomas was inspired by memories of her aunt Evelyn Maude Moore Coleman, in the framed photo with three of many Longwood University presidents with whom she worked.

Rosa Coleman Thomas pays a touching tribute in the dedication of her children’s book “Santa’s Little Angel”: “In memory of my dear aunt Evelyn Maude Moore Coleman, lovingly known as “A Maude,” who always believed a Christmas tree was not complete without an angel on top.”

Evelyn Coleman, a very meticulous lady, had used the same angel for the top of her tree for many years. Then several years ago her angel broke. Rosa gave her one of her tree topper angels. After Evelyn’s death, her brothers were going through her things and found the angel and returned it to Rosa.

The inspiration for this story of little Abby and her dreams came to mind about three years ago after Evelyn’s death while the family was decorating their Christmas tree.

With the angel on top of the tree, Rosa was placing Santa near the top and she wondered, “How cool would it be to be the angel on Santa’s tree?” The thought stayed in the back of her mind and that spring she began to put her story on paper.

Little angel Abby, who attends Miss Maude’s School of Guardian Angels, has dreams of becoming such an angel someday. But like all youngsters, she has to test her mother’s cautioning words, “Don’t fly around the house.” As the result of an unfortunate accident, she suffers a broken wing and broken dreams for her future.

After leaving Miss Maude’s school, she follows Santa’s advice and becomes a friend and helper with elves Andy and M.J. and Mrs. Claus. She soon discovers that her dreams had not been big enough.

Rosa pays tribute to her inspirations as she uses her aunt Evelyn Maude Coleman as Miss Maude, her uncle Anderson Coleman, as elf Andy, and her children Megan and Joel as elf M.J.

Maegan Penley, formerly of Lynchburg, worked closely with Rosa to create the watercolor illustrations for the story. If you know Rosa, you will notice little touches of her life with the fire department, huskies, and children in the background of the illustrations.

“Santa’s Little Angel,” published by Chestnut Village Press, is available online at Amazon Books or at Farmville Printing just in time for your Christmas shopping.

Rosa lives in Elam with her husband Darin Thomas and children Megan and Joel.

Right after “Santa’s Little Angel” became available on Amazon and while working with the Prospect Volunteer Fire Department Auxiliary at the Farmville Christmas Show, Rosa excitedly commented, “The response has been overwhelming.”

On Saturday the Prospect Volunteer Fire Department Auxiliary will hold the annual Pig Picking Supper from 5-7 p.m. at the firehouse. The meal will include pulled pork, limited number of chicken tenders, green beans, mashed potatoes, gravy, apples, bread, drink and dessert. The cost is a donation at the door.

The Prospect Community Thanksgiving Service will be held Wednesday at 7 p.m. at Glenn Memorial Baptist Church. The offering will go to the local food bank. Refreshments will follow.  All are invited.

The Glenn Memorial Baptist Church Senior Adult Ministry will host its senior meal on Friday, Nov. 27, at 6 p.m. Bring a covered dish and enjoy music of the Oak Hill Boys at 7 p.m.

Prospect United Methodist Church will not hold their Cowboy Church in November, December, January and February. They plan to resume in March. Regular weekly service is at 10 a.m. every Sunday, and all are invited.

Sympathy is extended to the family and friends of Joe Jones and William Thomas “Billy” Elder,

“As we express our gratitude, we must never forget that the highest appreciation is not to utter words, but to live by them.” – John Fitzgerald Kennedy

Your savory recipe for retirement