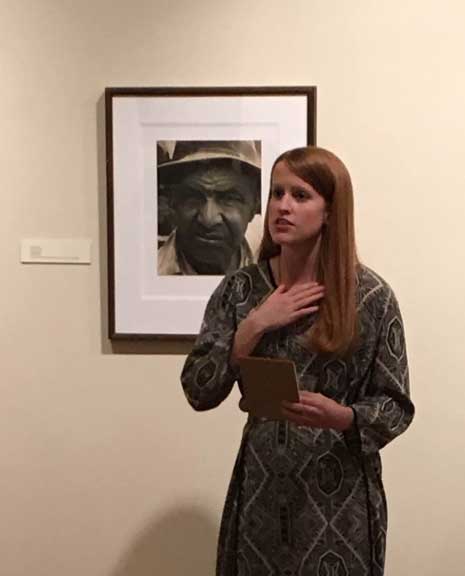 Elizabeth Baker, curator and researcher of The Untold Story, addresses the crowd at the opening of the exhibit recently at Hampden-Sydney’s Atkinson Museum.

The Atkinson Museum at Hampden-Sydney College (H-SC) recently debuted The Untold Story, a tribute to the early African-American workers of the college compiled by curator and researcher Elizabeth “Ebie” Baker.

According to Baker, “Wealthy, white men built the school conceptually — planning its layout, curriculum and more — and often receive all of the credit for founding H-SC. However, African American workers literally built the school, working the land, constructing its buildings and serving students and faculty in numerous ways. These early workers’ lives were closely intertwined with the daily life of the college, and many are ancestors of people who still work at Hampden-Sydney today,” she said.

“It’s been a really great experience,” said Angie Way, director and curator of the Atkinson Museum.

“It is very heartwarming to see people that I have long associated with the college, and realize that their families are very much a part of this community’s 240-year history,” she said.

“My greatest hope is for the exhibition to serve as a catalyst for others to start researching black history at the college,” said Baker.

“There has definitely been a hole in the school’s written history for a very long time, and while I see the exhibit as a sort of culmination of my part of the research, I hope that the students, faculty, staff and community members will continue it from here.”

Baker said she grew up on the college’s campus and has fond memories of the institution.

“As a child who had always loved exploring and was set on becoming an archaeologist, I was elated to come across several run-down cabins, outhouses and chicken coops, partially hidden by the trees and abundant in artifact scatters,” Baker said.

Baker went on to graduate with a master’s degree in history and museum studies from the University of North Carolina-Greensboro and decided she wanted to bring the history of African-Americans at Hampden-Sydney to the foreground.

“From [the] earliest days, African American men have served the college as groundskeepers. They plowed, planted and landscaped the campus to keep it beautiful and functional for students and faculty,” Baker said.

“More often than not, groundskeepers also worked as janitors and bell ringers,” she said.

“They scrubbed and fixed buildings, and stood in the bell tower and rang the old bell by hand to signal the beginning and end of classes and mealtimes. To this day, the college employs someone to ring the bell rather than making it automatic.”

“While the exhibit highlights several local families, there are dozens more that deserve equal recognition for their contributions to Hampden-Sydney,” Baker said.

The exhibit will be open until the end of fall semester at Hampden-Sydney College’s Atkinson Museum. According to Way, the museum’s hours will be extended on Thursdays until 7 p.m. to allow the community an opportunity to visit the H-SC exhibit.

On Wednesday Hampden-Sydney College will host speaker Jeffrey Tucker as he delivers a talk entitled “Markets or the Police State.”... read more