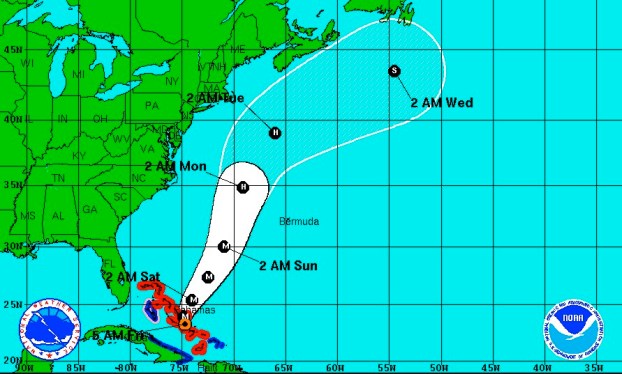 The Town of Farmville and Prince Edward County have both declared local states of emergency in anticipation of heavy rainfall and winds Hurricane Joaquin could bring this weekend.

The anticipated weather also closed schools in Buckingham and Prince Edward on Friday.

According to the declaration issued Thursday, the town could face dangerous conditions from the storm.

He said the biggest potential problem expected for Farmville is flooding, downed trees and power outages.

“By doing this, we basically get ahead of the game. We won’t have to flounder around in the middle of an emergency trying to make that declaration,” County Administrator Wade Bartlett said. “It’ll put us in line in case we ask for any assistance from the state or the federal government,” he said.

Flood watches and flash flood watches have been issued for areas in Buckingham, Cumberland and Prince Edward through Saturday, according to the National Weather Service (NWS).

The NWS said that some areas could see up to seven inches of rain. Heavy rain is expected to begin Friday.

“The public is urged to be on alert for possible flooding and downed trees from potentially severe weather across the area,” VDOT spokeswoman Paula Jones said in a press release. “Crews [have] prepared their equipment and are now monitoring conditions to ensure a ready response. Flooding and downed trees are likely as heavy rain pounds already saturated soil.”

“The biggest area we have trouble with is along Gross Branch and that’s the area from Second Street on up to Putney Street,” he said.

Spates, who serves as the town’s coordinator of emergency management, said Farmville could receive between 4 and 8 inches of rain. “It just depends,” he said of the potential rainfall.

The additional rain atop the saturated ground could, along with wind,  result in downed trees onto power lines, Spates said.

Kevin Flippen, Buckingham County’s Emergency Management coordinator, said that he thinks the ground could absorb the expected rainfall “with maybe some minor flooding issues. The one thing you always want to make sure everybody knows is when they do see water across the road … is turnaround, don’t drown. You definitely don’t want to drive through … that water,” he said.

Virginia Gov. Terry McAuliffe declared a state of emergency for the commonwealth yesterday.

Local officials are urging residents to be prepared for potential power outages by purchasing an extra supply of food, water, batteries, fuel and prescribed medications.

Longwood University has adjusted the weekend schedule for Oktoberfest due to the forecasted heavy rain. According to Longwood spokesman Matt... read more