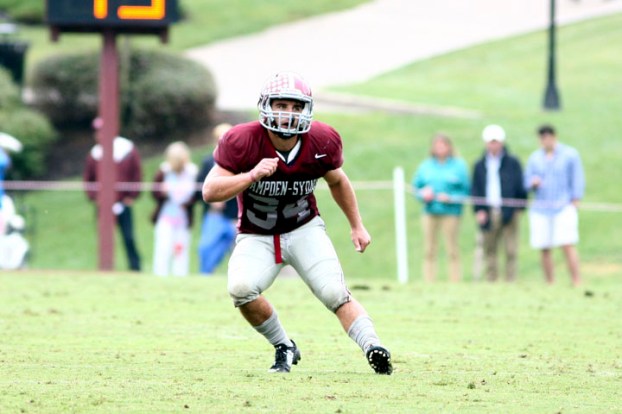 Hampden-Sydney’s Jay Brooks runs to get open for a pass.

The Hampden-Sydney Tigers football team improved to 5-2 on the season and 3-1 in conference play, doing so in an exciting 38-33 win over Shenandoah University. Senior linebacker Jay Brooks (Virginia Beach/Cox) pulled down the game-saving interception with just under a minute to play.

On the offensive side of the ball, freshman running back Kyree Koonce (Charlottesville/Monticello) came just seven yards shy of breaking the school’s record for rushing yards in a game, going for 220 yards and two scores on 32 carries. On the day, he had 301 yards of offense, including 81 receiving yards on five receptions.

In the beginning of the game, it was Shenandoah who came out with a bang; after forcing a punt, the Hornets took their opening play from scrimmage to the Hampden-Sydney nine on a Cedrick Delaney 80-yard run. One play later, Jalen Hudson punched it in for the touchdown.

On the ensuing drive, Shenandoah got the ball back on a Bayvon Young interception, but the Tiger defense matched the pick with a Larry Haskins (Buckingham/Fuqua) takeaway on the Hampden-Sydney seven-yard line.

The offense kicked into high gear, going 75 yards in two and a half minutes, capping off the drive with a 24 yard touchdown strike from Edgar Moore (Tallahassee, Fla./Maclay School) to Cam Johnson (Dillwyn/Buckingham).

After three traded drives, the Tigers took their first lead of the game, as Moore threw his second touchdown pass with under a minute to play in the first quarter — this one a 39-yard throw to Michael Mey (Glen Allen/VMI) on third-and-20.

The Hornets kept the back-and-forth battle going, scoring on the ensuing drive on a Jalen Brisco 25-yard touchdown reception, but a failed extra point attempt preserved the Tiger lead at 14-13.

The Tigers then upped that lead four plays later on a 50-yard touchdown connection from Moore to Johnson.

Sidney Henry (Haymarket/Battlefield) recovered a Delaney fumble on the first play of the Hornets’ drive, and that led to a Koonce one-yard leap into the end zone for a 28-13 Tiger lead.

Shenandoah was able to cut into the lead before intermission, using a Hayden Bauserman touchdown pass to cut it to 28-20.

The Hornets were close to cutting into the lead even further or even tying the game near the end of the half, but Henry nabbed an interception in the end zone to prevent the score.

The Tigers were the only team to find pay dirt in the third quarter, taking a 35-20 lead on another Koonce one-yard score.

Shenandoah, however, scored on the first play of the fourth quarter to bring it back within eight at 35-27.

Shenandoah scored another touchdown its response, but a failed two-point conversion kept it a five point game at 38-33 with 96 seconds remaining.

The game got even more interesting when the Hornets recovered the on-side kick. The Hornets moved well on the potential game-winning drive, getting all the way to the Hampden-Sydney 28-yard line. On a first-and-ten pass with under a minute, Brooks took away all hope of a comeback with a leaping interception on the Hampden-Sydney 15-yard-line to secure the win.

On the day, Hampden-Sydney racked up 478 yards of offense behind 268 passing and 210 rushing. Moore was 17-of-30 for 268 yards, two touchdowns and three interceptions. Johnson was his top target with game-highs of seven catches, 108 yards, and two touchdowns. Koonce caught five passes for 81 yards, and Mey had two grabs for 54 yards and a score. Koonce also added the monster line of 220 yards and two touchdowns on 32 carries.

Defensively, the Tigers allowed 531 yards on 335 passing and 196 rushing. Henry led all players with 11 tackles, including 1.0 for loss, one fumble recovery, and one interception.

Haskins and Nick Martin (Round Hill/Loudoun Valley) each added nine stops and a combined 2.5 tackles-for-loss, and Brooks notched four tackles to go with his interception. Ryan Mallory (Mechanicsville/Hanover) had two tackles and an impressive four pass break ups.

Hampden-Sydney will remain at home, returning to action Saturday as the Tigers host Bridgewater College at 1 p.m. on Family Weekend.