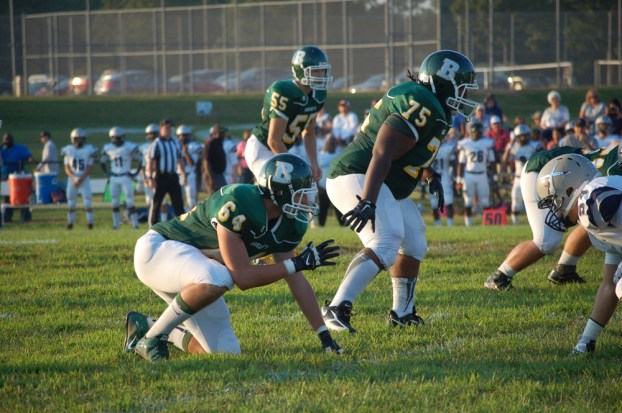 Buckingham’s Brycen Newby prepares for a play by crouching down.

Under the lights for Friday night

Friday night football action is amongst the Farmville area and surrounding counties once again this week. Buckingham, Cumberland and Fuqua will be striving to add another win to their season, while Prince Edward will be searching for redemption from last Friday’s loss to Central Lunenburg. Games begin at 7 p.m.

The Knights improved to 3-1 after their win against the Nottoway Cougars last week and have the momentum to continue rolling past challenging opponents.Although BCHS has defeated the Chargers the past two seasons, the Knights will have to be prepared to hold back Keaun Baskerville, Lunenburg’s leading scorer.

After suffering a 43-0 loss to Bluestone two weeks ago, the Cumberland Dukes brought a large amount of motivation to the field on Friday when they took a 39-0 win against King and Queen. However, this week won’t be as easy for Cumberland when it travels to Amelia, as the Raiders and the Dukes have the same season record of 2-1. Both teams will have to pull out their best plays in order to edge their opponent.

The Falcons are on a roll and no opponent has stopped them all season. With a 3-0 record, Fuqua will be looking to earn another win and have their season remain undefeated.

Hampton Roads will have to step up its game if it would like to see a victory in Friday night’s matchup.

The fierce Falcons sure won’t be taking it easy on any team this season.

Both Prince Edward and Bluestone are coming off of losses and will be pulling out all of their tricks to seal a win. Prince Edward will have the upper hand in the matchup since the game will be on its home turf, but that doesn’t mean Bluestone won’t work hard to upset the Eagles.

This game could go either way.

By Chris Baker Fuqua School reeled off 46 points in the first half and cruised to a 66-28 win over... read more