Prince Edward Sheriff Wesley W. Reed said Wednesday that he’s investigated the situation surrounding a photo of what appears to be a person reclining under a blanket in the office’s dispatch center.

“After my initial comment regarding the photograph, I felt the need to advise the citizens of Prince Edward County that this matter was investigated and the employee was dealt with according to our personnel policy,” Reed said in a press release.

Reed, who is seeking re-election in November, previously told The Herald that climate control was not good in the sheriff’s office, adding “if somebody being covered up with a blanket to stay warm, there’s nothing there to say that they were asleep or whether they were praying.”

The photo was posted on Facebook by Brandon Whitehead on Aug. 16 and praised by one of Reed’s opponents, former Deputy Sheriff Brandon Cummings, whom Reed fired last week. 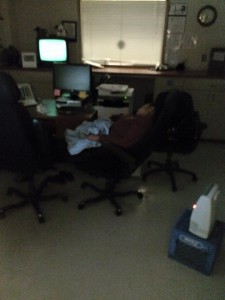 This photo, which was posted on Facebook on Aug. 16 by Brandon Whitehead, has resulted in numerous comments on social media.

Reed said that all matters involving employees of the sheriff’s office are handled in accordance to set policies and procedures.

“We are proud to say that we are a state-accredited agency with processes that allow the governance of this agency in a professional manner. I believe the release of the photograph to be politically motivated with an attempt to bring discredit upon the Prince Edward County Sheriff’s Office,” he said.

Reed said that as the county’s sheriff, he will “continue to maintain an open-door policy for all citizens of the county. I openly encourage dialogue with anyone having a concern or issue that they wish to bring to my attention or discuss.”

In the release, Reed identified numerous accomplishments of the department since he was elected sheriff.

FARMVILLE — On Friday, Johnston Drive in Farmville will be closed due to an athletic event at the Longwood Golf... read more