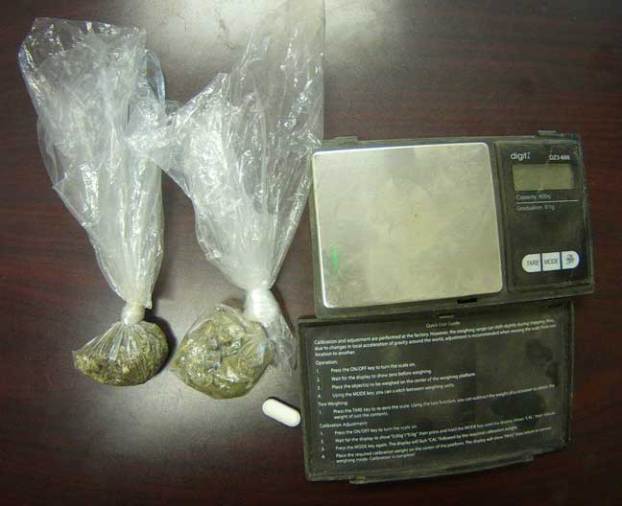 Police in Cumberland anticipate two arrests in connection with a recent drug bust that resulted in the seizure of marijuana, prescription pills and distribution materials.

Marijuana, prescription drugs, weighing scales, packaging materials and an unknown white substance were seized during the execution of a search warrant at 12 Ca Ira Mill Road in Cumberland recently.

According to Sergeant Mike Gordon, the warrant was executed at about 5 p.m. on Saturday, Aug. 29, following suspicious activity observed by deputies during an earlier incident.

Two suspects have been identified in connection with the drug bust and charges are pending, Gordon said.

Deputies were informed that “two men, as soon as we pulled up, ran out of the house with two large bags

and went towards the dog pens and went to the woods with these two large items,” Gordon said, citing the earlier incident that led to the search and seizure.

“Deputy [Josh] Rayfield got a digital scale from them that they had attempted to hide … There was green leafy material on it, also an off-white material that I’m sending off to the lab to see what that is,” Gordon said.

“We recovered a large amount of marijuana, scales, packaging material … and [an] unknown off-white substance and pharmaceutical pills that are going to be sent off as well,” the sergeant said.

“It was a pretty good bust,” Gordon said.

When the former Craddock-Terry shoe factories shuttered and laid off hundreds of people in Farmville, Dillwyn and in many other... read more