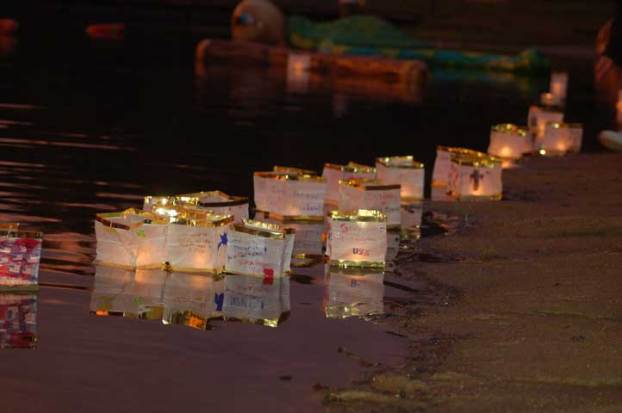 Hundreds of paper lanterns at Twin Lakes’ “Lighting of the Lake” paid tribute to those who serve.

As the nation paused to remember 9/11, Twin Lakes State Park offered its own unique reflection on the National Day of Service and Remembrance with its second annual community observance, “Lighting of the Lake.”

That “something more” led Forrest to plan and implement a special event “to show appreciation to our community’s service members, first responders and the brave men and women who lost their lives on September 11, 2001.”

An invitation was issued to the community to come to Goodwin Lake Saturday evening (Sept. 13) to decorate lanterns in memory of loved ones or friends. Lanterns and craft supplies were provided.

Captain of the Nottoway County Emergency Squad Hugh Berkley and his wife came to decorate a lantern for local 9/11 victim Peggie Hurt.

“She had only been on the job at the Pentagon for two weeks before the attacks,” Berkley said.

Hurt was a member of the Hurt Family Gospel group. Her favorite song was “The Battle Is Not Yours, It’s the Lord’s.”

As Berkley described the young woman who died at the Pentagon, his wife added a photo to a lantern for another acquaintance, Marine Capt. James C. Edge who died in 2005 during Operation Iraqi Freedom. At the time, he was the sixth VMI graduate to die in Iraq.

The Berkleys, like others preparing lanterns at nearby picnic tables, agreed that the Twin Lake’s program was a moving and appropriate tribute to those who had served.

Twin Lakes Assistant Park Manager Phil Morgan opened the program by thanking local high schools and the community for participating in the park’s National Day of Service and Remembrance event.

“As we sit here together we’re reminded of the cost of our freedom. We owe a great debt of gratitude to those who sacrificed their lives that we can live free,” Klag said. “We can start to pay that debt by remembering. As we remember those, who in the words of Abraham Lincoln gave the last full measure of devotion, we have some idea of the price of liberty.”

The National Day of Service and Remembrance, Klag noted, is the largest annual day of charitable engagement in the United States.

“Every year 40 million Americans and others in 150 countries around the world are performing good deeds to help others on this date,” he said. “The goal is to keep alive the spirit of unity and compassion that arose in the immediate aftermath of 9/11.”

Klag referred to remarks made by President Obama in a proclamation made on September 11, “Those who brought hate to our shores did not expect our country to emerge stronger or our beacons of hope and freedom to shine brighter as a result.”

As Klag spoke, a ray of sunlight broke through an overcast sky, and many in the audience turned to watch as a sheen of golden light spread across Goodwin Lake.

“We’re experiencing some of the brightness tonight,” Klag said.

As the program concluded, members of the community solemnly approached the lake to watch as candles were lit and placed in lanterns to be launched on Goodwin Lake. The overall effect of hundreds of floating paper lanterns did, as the program brochure promised, “illuminate the night.”

“In many cultures, paper lanterns are used to honor the souls of those who have passed,” the brochure added. “They represent the interconnection of past, present and future and carry a message of hope for a world at peace.”

As the sun set on the Twin Lakes event, hundreds of lanterns lit up the night with a glow of remembrance that is our hope for a peaceful world.

For more photos visit www.farmvilleherald.com and look for Twin Lakes in the photo gallery section.