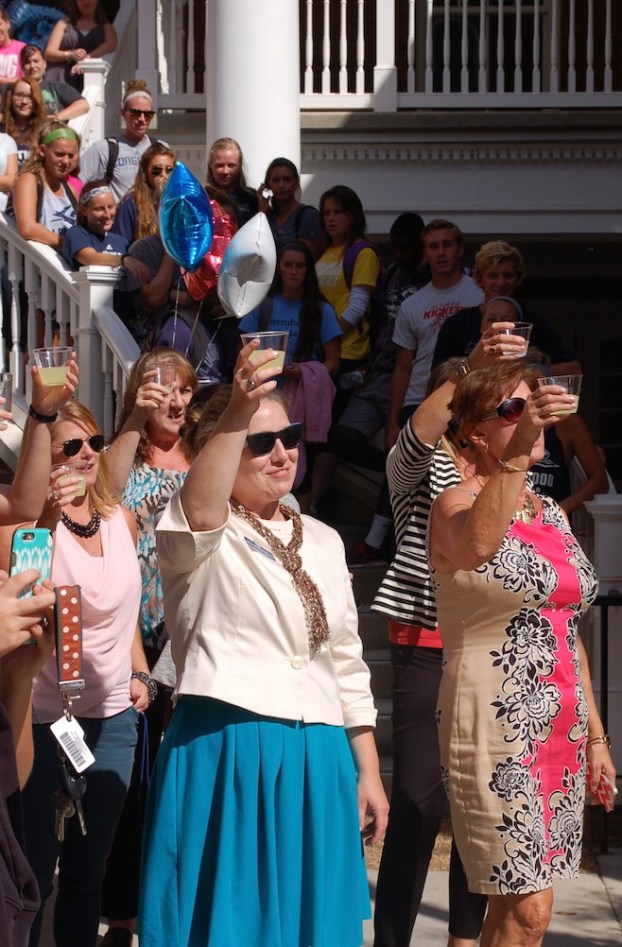 Longwood students, faculty and staff cheered the vice-presidential debate announcement Wednesday afternoon at Beale Plaza on Brock Commons — a short walk from Willett Hall where the debate will held in 2016. Celebrating in the foreground are Nicole Perkins, left, and Brenda Ferguson.

The Farmville community is responding with jubilation to the announcement that Longwood University will hold the 2016 vice-presidential debate next October.

“This is going to be a once- in-a-lifetime event for Prince Edward,” Prince Edward County Administrator Wade Bartlett said. “The immediate economic impact will be welcome and substantial, but it’s the opportunity to showcase Longwood University, Prince Edward and Farmville to a national audience that is going to have a much greater and long-lasting impact to our community.”

“Well, I’ve been here since 1976. It’s the greatest thing I’ve seen happen to the university and the town in terms of getting our name out,” longtime Longwood political science professor William “Bill” Harbour said. “It’s a big deal for Longwood and for Farmville and … the commonwealth.”

“I think it’s a great thing for our community and Longwood should be commended for their efforts,” Farmville Town Manager Gerald Spates said of the news. Spates said if it hadn’t been for Longwood and its facilities, the town wouldn’t see such an event.

[and] bring some people here and learn more about the school,” said Longwood senior Carson Reeher. “I think it’ll be good for the students to get more involved in politics.”

“I really think it’s a great thing, it’s like Longwood of all places,” senior Marlisha Stewart said. “We were chosen to do it … I think it’ll be interesting to see what comes and how much publicity it brings in for the school.

“I think it’ll have a tremendously positive effect,” said Jim Wilck, who represents the Farmville 701 District on the Prince Edward Board of Supervisors. “I think that the publicity for both [Farmville and Longwood] will be tremendous.”

“Logistically there’ll be some challenges. It’s way too early to anticipate what they will be just yet. With that being said, I feel very comfortable with the cooperation that we’ve got with the Longwood Police Department and the sheriff’s office and law enforcement across the state that we’re going to bring the necessary resources that we need into the community to keep things safe.”

Davis had experience in dignitary protection while working in the Roanoke area.

“[During] this political time of year visits come to towns big and small,” Davis said. “We’re very fortunate to to be a part of this, and I feel very confident that we’re going to be able to do everything we need to make this work out well.”

Longwood University Police Chief Robert “Bob” Beach said when university officials asked if the department could handle the event, he assured them it could. “All it will require is a significant support for the resources needed to get it done,” he said. Beach said the debate would be a big challenge for the department, “but, it’s a very, very doable challenge.”

Bartlett, the Prince Edward county administrator, believes the debate will bring hundreds, if not thousands, of people to Farmville.

“Conversely, there will be literally millions of people … who will hear and learn of our community in the weeks leading up to the debate,” Bartlett said. “National media will talk about this for weeks. The opportunity for us to market ourselves is priceless. We could never afford to buy the amount of national exposure we’re going to receive for free. That is the long-term opportunity we have.”

Fifth District Republican Congressman Robert Hurt, who represents Farmville in the U.S. House of Representatives, applauded the decision to hold the debate at Longwood.

“This is excellent news for Longwood University and the Farmville and Prince Edward County community, and I am pleased that the commission recognized the value of selecting Longwood as a venue. Virginia has played a central role in our nation’s debates since its founding, and it will again host a dialogue vital to our democratic process,” he said.

The Farmville Town Council voted Tuesday to purchase the Travis Building in downtown Farmville for $40,000. The town plans to... read more