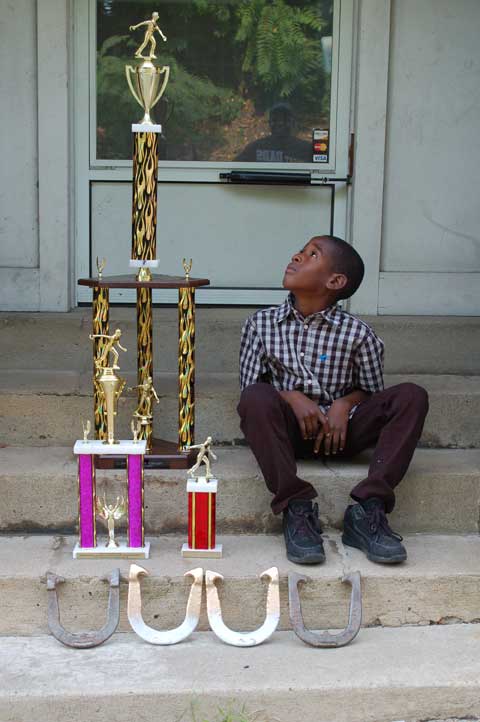 Raquan “Boonie” Bolden, of Amelia, looks up at one of his horseshoe tournament trophies.

When picturing a nine-year-old, one might envision a child with a great amount of energy running around a playground or playing a video game within the confines of their home. But, not Raquan “Boonie” Bolden, of Amelia.

Boonie is a horseshoe-playing superstar in the the Heart of Virginia and has beaten grown men three times his size and age.

He began throwing horseshoes around the age of three and has loved the game ever since. “Everyday he comes home from school he is outside throwing all the way up ‘till dark. On the weekends he plays and he practices non-stop,” said Boonie’s mother Latisha Bolden.

Boonie has played in tournaments in Prince Edward, Chase City, Crewe, Blackstone, Buckingham and most recently in Cartersville where he won first place playing singles.

“He has been to about six or seven tournaments and came out in third or fourth place,” family friend Bobby Easter said. “The big trophy is the one he won in Cartersville and that

was the first one he won playing one-on-one against someone. Nine grown-ups were in that tournament and he won.”

Easter is one who takes Boonie from tournament to tournament.

When asked how he felt about beating adults in horseshoe tournaments at his young age, Boonie responded, “Awesome!”

The child also said that horseshoe throwing is his favorite sport and that he is excited to practice everyday for tournaments.

So, what’s next for Boonie?

He, along with the help of his family and Easter, will be holding a 2 p.m. horseshoe tournament on Sept. 12, in Rice.

“We are holding it at my place at 2674 Scuffletown Road in Rice. It is right beside Sailor’s Creek Battlefield. It should end around 4 or 4:30 p.m.,” Easter said.

Boonie attends Amelia County Public Schools and is the grandson of Norman and Rosa Bolden, of Amelia.