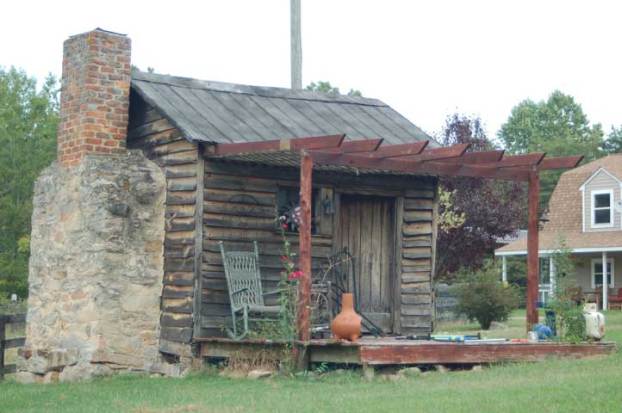 Local veteran Amy Morgan is in the running for a spot on a renovation network show next season. She hopes to convert an 1850s-era cabin on her property into a yoga/exercise retreat for daily pain-management therapy.

From restoration to retreat: Veteran vies for renovation show spot

Amy Morgan’s career in the Army began with the Miss America Pageant over 25 years ago.

“I almost didn’t go in the Army,” Morgan said. “I was second runner up in the Miss West Virginia Pageant, and if I won the Army was going to release me.”

As it turned out, another contestant won the title that year.

“A few months later, I went from heels to combat boots,” Morgan said. “I had planned to go in the Army for three years, but I decided I loved it — and I stayed.” 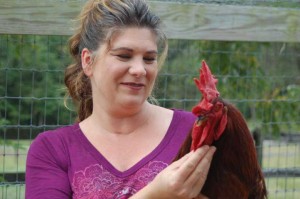 Amy Morgan (above) and a rooster named Roo enjoy a visit on the Morgan’s farm in Rice.

Morgan served in the Army for 21 years, retiring in 2010 due to medical reasons. Now the local veteran, who lives with her family near Rice, is vying for a spot on a renovation network show to convert a historic cabin on her property into an exercise/therapy retreat.

Morgan’s struggle with chronic pain began at an early age.

“I was diagnosed with fibromyalgia five years into my Army career,” she said.

Morgan, who was a musician and served in Army bands, made E7 (sergeant first class) in nine years.

“I was promoted pretty quickly,” she said. “Everyone thought I was destined for great things.”

Despite daily pain and fatigue, Morgan continued to work toward her goal of becoming a first sergeant.  Starting in 1999, she served as drum major at Fort Hood, Texas, with the 1st Cavalry Division Band, the 76th Army Band in Mannheim, Germany, and the 36th Army Band at Fort Huachuca in Sierra Vista, Arizona.

In 2002 following the birth of her daughter while in Germany, Morgan developed complications that led to five surgeries.

“Unfortunately, this brought everything to a standstill,” she said.

Morgan, who is originally from West Virginia, was a classically trained pianist.

“I started lessons at the age of 4,” she said. “My piano teacher was from Julliard, and that’s what she was pushing me toward. She wasn’t pleased when my mom took me to see the Army and Air Force recruiters.”

Once in the Army, Morgan knew she had made the right choice.

“I loved the Army — and not just the music,” she said. “I loved the Army side of things — going out into the field. We were soldiers first. I did MP duty for security, and, of course, deployed.”

“I ended up missing days of work due to appointments, surgeries and therapy sessions,” she said. “Eventually I became non-deployable.”

In 2010, Morgan made the difficult decision to retire. Shortly after, she was rated 100 percent disabled by the Veterans Administration.

Morgan, her husband Pete, also a veteran, and two children settled in the Farmville area and purchased an historic home in Rice.

“My husband grew up in Amelia,” she said. “We came back here to be near family.”

“Originally the house was a log cabin,” she said. “Later the four-square was added out front. I believe that was in 1859.”

Also on the property is the original cookhouse.

Morgan envisioned the cabin as her own personal space, a perfect location for her pain management therapy.

“I had been toying with the idea of turning it into a yoga/meditation retreat using recycled and salvaged materials, but our budget didn’t allow it,” she said.

“It actually helps, especially first thing in the morning,” she said. “It improves your whole mood.”

Recently Morgan was excited to be contacted by a casting representative for a television network that features renovation projects.

If selected for the show, Morgan would have to raise part of the renovation cost.

The local veteran has set up a Go Fund Me page to accept donations.

“They selected the subject for the show this season, but they told me I was at the top of the list for the next one,” Morgan said.

Unable to lift heavy objects or stand on her feet for long, Morgan worries about the effects of her disabilities on her family, especially her children, ages 12 and 18.

“I miss a lot of their events,” she said. “They’re always worried about me.”

Some days are good for Morgan, others not so good.

“Sometimes I can be out shopping, and all of a sudden it will hit me,” she said. “I have to call my husband — sometimes he has to take me to the emergency room.”

Morgan believes that having her own spot in the old cabin would make the rough edges in her life a bit smoother.

Morgan, who suffers from pain-related insomnia, often gets up at night to avoid disturbing her family.

“I’d love to have a sleeping porch in the cabin, too,” she said.

Despite life’s difficulties, Morgan is thankful for her family and her Army career.

“Everything works out the way it’s supposed to,” she said. “I do regret the medical things, but without the Army I wouldn’t have had the wonderful career, the travel and I wouldn’t have met my husband.”

Hopefully that tomorrow will include a cabin retreat reflecting the pioneer spirit of the country that Sergeant First Class Amy Morgan so proudly served.