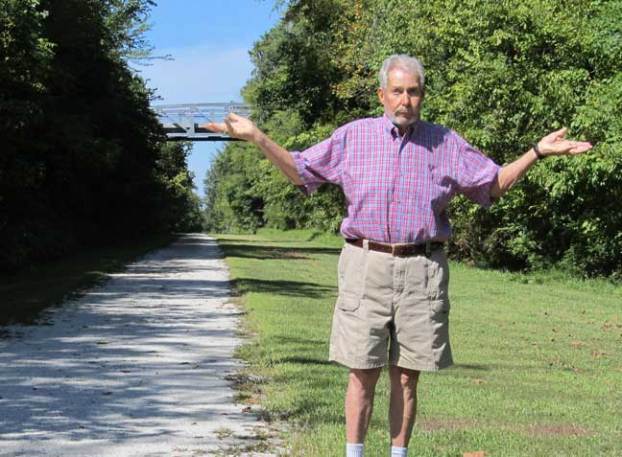 Dr. Jordan asks a question that remains to this day — where is the missing Civil War treasure?

I teach archaeology at Longwood University, and one of my favorite courses is “Folklore of Virginia.”  My students are interested in the legends about Farmville’s early days, and this is one of them.

It was the first week of April 1865 and 1,500 citizens of Farmville were nervous.  News was spreading that Confederate defenses around Petersburg and Richmond were broken and that President Jefferson Davis and his government were fleeing westward by rail toward Danville – a route that would carry them through the middle of Farmville!

If you were standing on Main Street on April 6, you would have heard the rumble of cannons at Sailor’s Creek. That day Robert E. Lee lost nearly 8,000 soldiers and eight general officers, approximately a third of his forces. The remaining 24,000 Confederates moved along the cold and muddy banks of the Appomattox River into Farmville.  All day they struggled through the mire on Main Street and Beech, Appomattox, Buffalo and High streets.

Townspeople offered what food and refreshment they could to exhausted troops who had not eaten since Monday — soldiers were picking through horse and mule droppings for undigested kernels of grain.

It was not clear whether there would be an open battle in town with the pursuing Federal Army. Such a fight happened in Fredericksburg in December 1862, and almost every home and business was destroyed. In Farmville people began hiding whatever they still had of value.

One thing of great value was the student body of the Farmville College, as Longwood was then called. Eighty young ladies stood on the third floor of Old Main (the present-day Rotunda) watching the shadows of retreating Confederates move up High Street and wondering if a father, brother or uncle was among them.  Meanwhile, at The Planters Bank on Main Street, Zack A. Blanton, cashier and bookkeeper, was frantically gathering money in the safes and burying it for safekeeping.

On April 7, Gen. Lee arrived in Farmville and met with his staff at the Jackson House on Beech Street, had a cup of coffee, washed the red dust out of his beard in a tin basin and crossed the street to bid his respects to “the widow Thorton” whose husband Col. John T. Thorton had been killed in 1862.  Here Lee was informed that the Yankees were entering town, and he rode toward the railroad (where Newman Concrete is located) to order the Army supply train towards safety at Appomattox Depot.

While these events were transpiring, two ladies of the town took affairs into their own hands. Mrs. Elizabeth R. McIlwaine, wife of Rev. Richard McIlwaine, wrapped watches and jewelry entrusted to her by Confederate soldiers into carpet rags to secure them from looting Yankees. She later was able to return these valuables to their owners.

Her friend, Mrs. Christopher C. Lockett, was not so fortunate! Keenly aware of the value of “real property” (her husband incorporated Farmville Insurance Company), Mrs. Lockett gathered up her own silver spoons and jewelry from her house on Beech Street, convinced her friends to do the same and buried them in a bundle in “the new cut” of the Southside Railroad. Today the student walkover from Longwood’s Lancer Park crosses directly over the “new cut,” now High Bridge Trail, where Mrs. Lockett labored with her shovel that night.

Mrs. Lockett chose this spot because the railroad was laying rails, and the fresh dirt, she hoped, would not tip the Yankees off to the buried treasure. She was absolutely correct — so correct, in fact, that she was never able to locate the spot again after the war.

Farmville’s treasures are still safely hidden in “the new cut.” In the truest sense, our past remains alive in Farmville’s hidden Civil War treasure. It is a tale like this one that binds us so warmly to our “olden days.”

(For a detailed account of that week in Farmville, read “Farmville’s Fiery Friday” by local historian William E. Thompson.)

Fuqua School was full of fun and fearlessness on Sept. 9 as the National Guard sponsored the popular action-filled assembly... read more