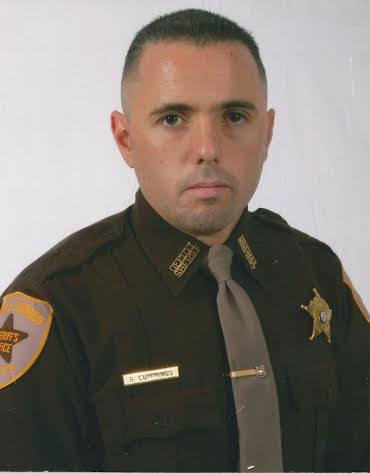 Brandon Cummings wants to use his 15 years of law enforcement experience as the next sheriff of Prince Edward County.

Cummings, who recently announced his candidacy, moved to Prince Edward in 2007 and was hired as a patrol deputy for the sheriff’s office. “I have served the community of Prince Edward as a deputy sheriff for eight years now and would like to use my 15 years of diverse law enforcement experience and serve as your new sheriff,” he said in a statement.

Cummings is one of three candidates for sheriff who will appear on the Nov. 3 ballot. Incumbent Democrat Wesley W. Reed and Independent Dale A. Vaughn are also candidates.

Cummings, who was born in New Jersey, says that his career has molded him to fit a 21st century world.

“Between terrorism and the rise in violent crime in America, we need a fresh mind with fresh ideas in this office to better serve and protect the citizens of this county. I believe that I have the training and experience to do just that, and I am asking your help in electing me to the position. …,” he said.

Prior to his service in Prince Edward, Cummings served in the U.S. Coast Guard as a volunteer firefighter and as a law enforcement officer in New York and Richmond.

“After graduating from basic training, I was stationed in North Carolina where I specialized in law enforcement and search and rescue along the Outer Banks of North Carolina.”

He said as a member of the Coast Guard, he attended schools and had on-the-job-training “to serve and qualify as [a] federal law enforcement officer which entails the stopping, searching and boarding of vessels within the territorial waters of the United States.”

After 9-11-2001, he volunteered to deploy and provide anti-terrorism force protection for the waterways surrounding the newly established prisoner holding facilities in Guantanamo Bay, Cuba. “In late 2002, I returned to the United States where I continued my law enforcement career path by requesting to be transferred to New York City … to provide security for the waterways of New York Harbor. During this time I honed my skills as a federal law enforcement officer with the boarding of hundreds of vessels as well as assisting in the escorts of high-value assets such as cruise ships and liquid propane tankers,” Cummings said in a statement.

While in Richmond, he worked in high crime-violent areas “which, again, showed me different sides of law enforcement and taught me a tremendous amount about inner-city policing and the importance of ‘community policing’ where the citizens of your patrol area are your greatest ally in fighting the crime that plagues their streets.”

Cummings, who is a small business owner, operating Southside Off Road in Rice, is an Independent candidate.

ARVONIA — Arson investigators with the Virginia State Police are looking into the cause of a massive brush... read more