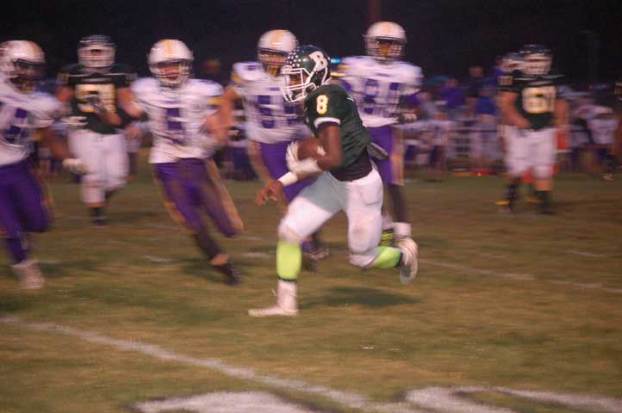 Harley Gough put a hurting on Central Lunenburg as he ran a 75-yard blocked field goal return for a touchdown in the Knights homecoming game on Friday night. Buckingham couldn’t be stopped on its home turf, as they took a 70-27 win over the Chargers.

Buckingham set a school record for most points scored in a football game, thanks to the Knights offense led by Leon Ragland.

Daniel Brickhill joined the touchdown crew with a 1-yard touchdown run near the end of the first quarter.

The Chargers were barely hanging on when Buckingham slowed down its pace in the second quarter. However, they still continued to add more points to the board.

The third quarter saw only the Knights score as Rajheem Holman snuck in for a 3-yard touchdown. Harley Gough followed with his impressive blocked field goal, which was returned for a touchdown to finish out the third quarter.

Jervonte Morgan started off the fourth quarter with a 60-yard fumble return, which was followed by anticipation of the Knights team.

The previous school record for most points scored in a football game was 69 points. Buckingham was determined to beat that score and they knew it was in sight on their homecoming night.

Holman secured that hope for the Knights as he scored on a 60-yard touchdown, which was the last score of the game.

“The boys played hard and worked hard for the homecoming win. I never in my wildest dreams thought we would score 70 points against Central,” said Buckingham head coach Craig Gill. “I just want the team to keep getting better and playing good.”

Brickhill also had a touchdown, along with two carries for three yards. Harley Gough had a touchdown as well. Zach Baird went 8-for9 in extra points.

Buckingham will return to action on Friday, when it travels to Bluestone for a 7 p.m. game against the Barons.