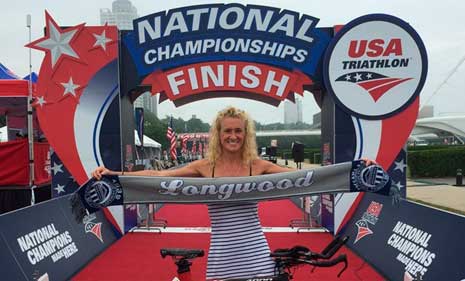 Overall, Hanson finished 120th out of 977 female competitors with a time of 1:17:14.42, which was the third fastest of any female entrant from Virginia. Her top-30 percent finish inside her age group qualifies her to compete for Team USA at the Sprint World Championships in Cozumel, Mexico, on September 11-18, 2016. Hanson’s most recent accolades are a continuation of her journey from cancer survivor to high-level triathlete. LongwoodLancers.com detailed her story last November following her 25th-place finish at the 2014 USA Triathlon National Championships.

“I am extremely thankful for the support Longwood has given towards my efforts, and I hope I made her constituents proud,” said Hanson, who is entering her ninth year coaching Longwood’s men’s and women’s cross country programs.

Hanson emerged from the swim leg of the 2015 national championship in 25th place but surged to 13th after the bike and run portions of the race. She logged her division’s second-fastest time in the five-kilometer run with a 21:11.23 and shaved more than 10 seconds off her total time from the 2014 Sprint National Championships. “This year was said to be the deepest in talent in years, and the very few slots USAT offered on the national team were hard to obtain,” Hanson said. “The improvements I made this year were significant for a sprint distance, especially with the water temperatures dipping to 63 degrees in Milwaukee.

“I definitely need more mass open water swim start practice because I struggled to establish my true swim pace while getting kicked and beat up and having to fight through everyone at the start. But like I tell my athletes, part of our successes are the lessons we learn and the mistakes we correct.”

Hanson’s success at the national championships precedes the return of her 2015 cross country squads, who arrive back on Longwood’s campus on Aug. 16. The Lancer men return six letter winners from 2014, including senior Russell Reed. The women’s team returns three letterwinner, including juniors Erica Maywer and Gracie Piekarski.