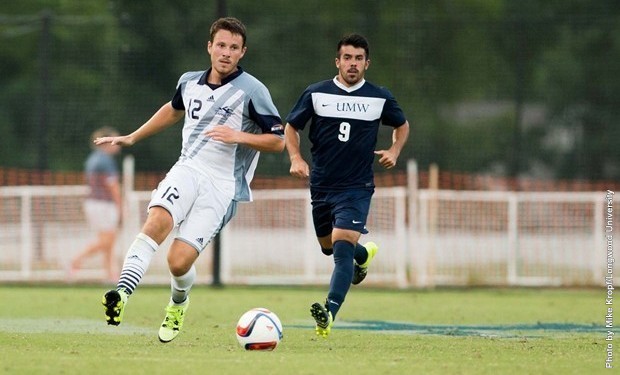 Midfielder Finnlay Wyatt notched a pair of assists, as Longwood University’s men’s soccer team earned a 2-1 victory over Mary Washington in its final tune-up for the regular season.

Wyatt, a product of Richmond, has been an offensive force for Longwood from his spot in the midfield, ending the preseason with a goal and two assists for a team-leading four points in the two games played.

The Lancers tallied a goal in each half, as senior Carl Carpenter picked up his second victory of the preseason. Carpenter made one save on three shots faced throughout the period. Meanwhile, Carlos Canas came on in the second half to complete the victory, as he notched five saves on nine Mary Washington shots. Each of Longwood’s two goals on the night came off a corner kick, as the Lancers were able to take advantage of the 9-4 margin in corners while also enjoying a 17-12 margin in shots throughout the contest.

Alex Waite opened the scoring in the 34th minute of play, as he was able to send a header off a Wyatt cross to the back post to give the Lancers the edge.

Less than seven minutes into the second half, Michael Marqulis gave the Lancers a 2-0 advantage after Wyatt sent a cross into the box off a short corner and Marqulis was able to beat the Mary Washington defender to the ball to add to the Lancer lead. Mary Washington spoiled Longwood’s shutout bid in the 85th minute, as Jacob Burke scored on a header off a free kick.

Longwood starts the 2015 regular season on Friday with a match against in-state foe VMI. Kickoff from the Athletics Complex is set for 6 p.m. “These exhibitions have helped prepare our student-athletes for the regular season, but we have some things we need to work on” said head coach Jon Atkinson.

The 2015 cross-country team at Hampden-Sydney College will be looking to use a combination of returning and experienced athletes, along... read more