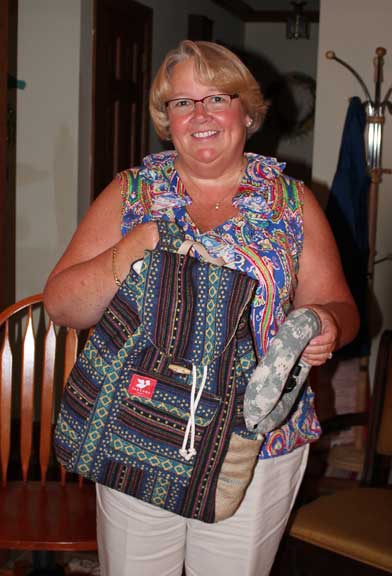 Sharron Harrup displays items made by STEPS employee, the Taloma Tote and the doggie bump.

The Redbud Garden Club held its June meeting in the home of Mary Hazlegrove with Barbara Stimpson as co-hostesses.

Sharron Harrup, CEO and president of STEPS, spoke about “What Actually Is “STEPS,” which stands for Southside Training, Employment and Placement Services. The organization began over 30 years ago as the Sheltered Workshop, and in 1990 was renamed STEPS. STEPS is located in Lunenburg and Prince Edward counties. Farmville STEPS, which has taken over Hope Community Services, educates through the Discovery program.  They also help with economic development by having a Recycling Center in Farmville. Ms. Harrup showed members two products that they currently are making, the doggie bump and Taloma Totes. Sharron stated the main objective is to try to prevent poverty. The presentation was enjoyed by all.

“Pretty in Pink” – an arrangement of all pink including the vase (honoring Breast Cancer Awareness Month): Ann Ligon received a blue, and Geraldine Sanderson a red ribbon.