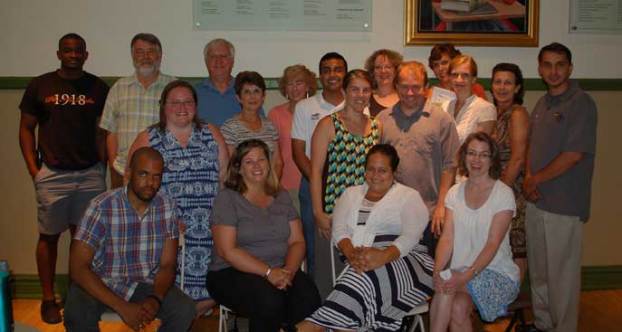 A grassroots group of parents and community members have found common ground in Support Prince Edward Schools, which meets regularly at the Moton Museum.

It was born in the living room of a parent with kids in Prince Edward County Schools.

Joined by the common threads of wanting to see the county’s schools improve and a passion for public education, the Support Prince Edward Schools group meets at the Moton Museum in the shadow of a portrait of one of Prince Edward’s educational giants, Barbara Rose Johns.

Johns cared so much for education, she led a student strike to protest unequal facilities. This group wants more from the system.

“We all are thinking the same things,” said parent Heather Edwards, who leads the meeting. “We all want what’s best for the children of our community. I think we have different ideas of how to get there, but I think if we all work together, there are some common goals that we’re all shooting for, and so we’re gonna put aside our differences and work towards meeting the goals that we have in common.”

It is still in its infancy, but the group is purely grassroots.

Over nearly two hours, they touch on a range of topics, including a desire to see the reins on social media relaxed by school officials for increased information; making connections between the school and the community information flow; coalescing into a formalized group; a desire to have their voices heard by decision-makers; frustration in getting a response to questions; honing a mission statement; the need to change the culture in the school system to demand excellence; connecting volunteer groups wanting to help with a listening ear; and questioning whether there is a correlation between Standards

of Learning tests and the number of talented and gifted students no longer in the system.

The ideas and thoughts fall like rain and spark lively, involved discussion with frustrations bubbling to the surface because participants are concerned.

“We encourage you to respond to us and tell us what’s going on, ’cause a lot of the things that you’re telling us we’ve never heard before,” said Sherry Honeycutt, one of two school board members who have come to listen.

Also here is high school Principal Zoltan Kerestely, County Supervisor C.R. “Bob” Timmons Jr., and Richard Altice, a candidate for the Hampden District seat in November. Kerestley, who has three children in the elementary school, volunteers when it’s his turn to introduce himself that he’s “here because I care about kids.”

According to Edwards, the group dates to a 2012 meeting in her living room as county supervisors were tackling the school budget. They felt “a little powerless to influence that vote,” she says, “so there was a group of five moms who got together and just started brainstorming ways that we could help the schools, kind of assuming that the larger money issue was in some ways kind of out of our hands.”

A Facebook page came from that discussion. They posted government meeting times, tried to issue alerts on the budget matter and called for community members to become advocates for the schools. The group of some 60 friends, with a potential $400,000 cut in local school funding looming this year, re-energized. They opened what had been a closed Facebook page, and their membership is approaching 300.

Edwards says they are providing “this social media outlet of information support, but also accountability that I think could be and should be happening within the structure of the school system, but we’re…separate.”

Many in the group have other educational options for their children; they could pull up stakes for greener pastures, but they have chosen to stay engaged.

“As I’m thinking about all of the people in this room, yes, most of us could take our kids out of the public school; most of us have the flexibility to get them to another county,” Edwards said. “Most of us have the financial means to put them somewhere else, but we choose not to because we believe in public education. We believe in the power of public education to improve a community and to be a driving force for change in a community, so we’re trying to find ways to make that happen.”

There are some in the community who wish “that we just all stop talking about … what happened 50 years ago, but we cannot stop talking about it until it’s fixed and it’s not fixed,” Edwards said. “And I think that the public schools is a way to fix it.”

There is an open door, and Edwards offers that they want “everybody to be a part of the conversation.” She says she wants it to be a place where those who come can say what they think and feel. She commends Kerestley and Timmons for participating.

And some are listening. The school board’s Honeycutt tells the group to “please know that we really do want to hear from you, and we really are trying.”