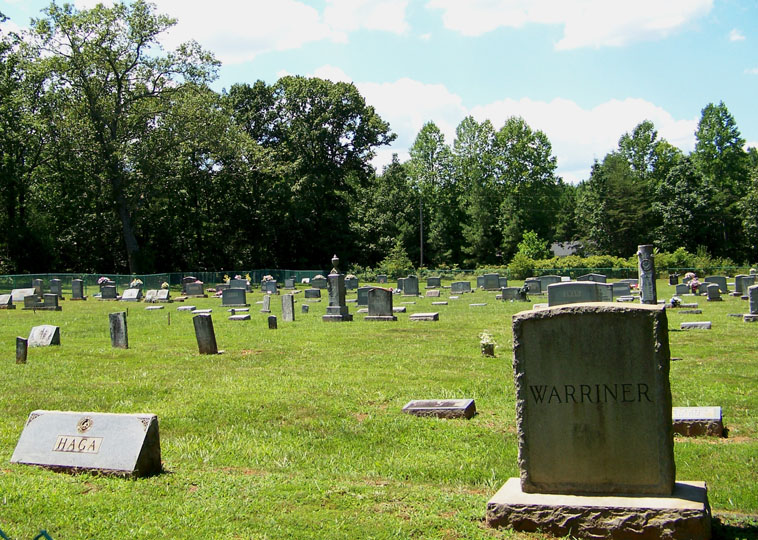 Monuments of marble, granite, and green building stone mark the final resting place of many of our neighbors from the past.  Warriners, Hagas, Swans, Pattersons, Carters, and Brightwells are among some of the turn of the twentieth century residents of Olive Branch Cemetery, near Elam.

Cemeteries on the grounds of rural churches began in the late 1800’s as people got away from using burial grounds on the family farms. Records for these early church graveyards are often sketchy or none existent. An early summer morning stroll among the markers of Olive Branch Cemetery will give the visitor a look back in time.

There is an old Olive Branch Church cemetery in the woods behind the present day church, probably near the site of the log church dating to 1814. Listed on the  Find A Grave website are 10 documented graves of Hubbards and Prices, interred between 1864 and 1934.

In 1829 Benjamine and Mary W. Boatwright conveyed two acres to the church society with a frame church being built in 1859. Sometime in the late 1800’s burials began west of the church in what is today’s cemetery.

The earliest dated tombstone belongs to Lula G. Patterson (1882-1897).  The lichen covered green building stone is hand etched. She and the earliest inhabitants of the cemetery reside near the giant spruce.

Later sketches dated 1930 indicate that a new portion was added directly behind this section with names such as Elam, Cumby, Garrett, Scruggs, Reynolds, Baldwin, and Woodall.

Records indicate that at that time a plot cost $10 with half plots going for $5.  Some costs incurred by the committee were $130.69 in 1930 for a black wrought  iron picket fence purchased from W.C. Chick & Bro. in Prospect, $6.25 in 1938 for a rake and wheelbarrow, and $1 to Edward Harvey and hand for labor. Families of plot owners paid $1 per year for the upkeep.

The fragile record book apparently was kept by E.H. Gilliam, cemetery committee secretary and treasurer. Others listed on the committee were W.W. Swan, J.R. Fore, G.C. Clements, and J.W. Chick.

An interesting side note is that the Ladies Aid Society seems to have had a lawn party in the area of the cemetery and donated $30 in 1934.

Another addition to the side of the first two sections was added in 1949. Among the names in this section are Phillips, Moore, Dowdy, Chick, Adams, Binford, and Shelton. A larger section was added in the 1970’s behind these sections.

The Find A Grave website has 277 recorded markers currently listed. Individuals, not the cemetery association, submit the documented information to the site. Not all presently existing tombstones are listed.

Olive Branch United Methodist Church will have its annual ice cream social on Sunday, August 16, at 7 p.m.  Everyone is cordially invited.

The Pamplin Volunteer Fire Department and EMS would like to say thank you to the community, riders, volunteers, and everyone else that helped to make the 2015 Poker Run a successful event.

Katrena and Tom Young visited the Glenn family in Burlington, WS, for a Glenn Family Reunion .

Earl and Barbara Pickett enjoyed a 60th anniversary party given by their children, Todd and Diann Pickett and Beth Pickett and grandchildren. Many friends and family, including relatives from Maryland, came to Evergreen United Methodist Church to enjoy good food, movies, and pictures of a lifetime.

Elfrieda Kerns wishes to thank everyone for the many prayers, cards, and get well wishes.

Sympathy is extended to the family and friends of Angelo Kinte Harvey and Betty Jean Davis.

“…approach thy grave, Like one who wraps the drapery of his couch About him, and lies down to pleasant dreams.” – William Cullen Bryant