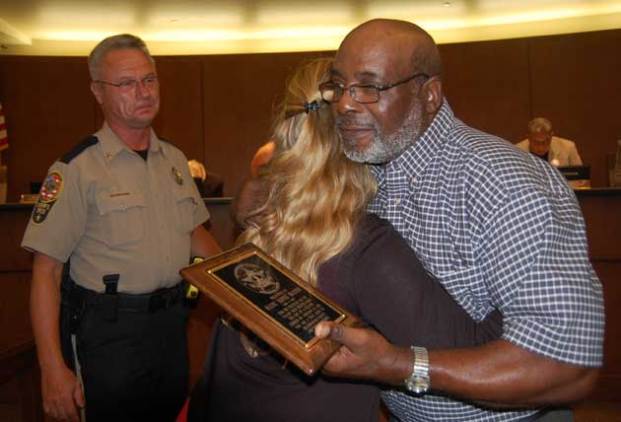 Angie Wright laid limp in her car, unable to move.

Little did she know that, after slamming into the back of Wayne “Skipper” Braxton’s tractor trailer on Greenway Road in western Buckingham, Wright had broken her leg in numerous places. Ten of her ribs were broken as well. Her spleen had been lacerated, a lung was punctured and her kidney was bruised.

On top of all that, her car had caught on fire. The dashboard of her car began to burn in orange flames as she sat injured.

That’s when her “heaven-sent” lifesaver, as she calls him, came to her aid.

Braxton, who was out examining the load he was hauling, pulled Wright away from the burning vehicle, saving her life.

“Wright’s injuries were numerous and of such a nature that, without Mr. Braxton’s help, would have proved fatal had he not acted,” said Buckingham Sheriff William G. “Billy” Kidd Jr., reading a release to the Buckingham Board of Supervisors, which recognized Braxton for his valor and heroic efforts.

“It was an honor,” Braxton, who drives for Foster Trucking of Dillwyn, said of his recognition.

As Braxton slowly traveled on Greenway Road due to the sun in his eyes back in January, Wright struck his large vehicle — the sun, too, in her eyes.

“I never saw him until I actually hit him,” the since-recovered Wright said. “I was trapped in the car. My foot was stuck under the gas pedal and … I broke my leg. I couldn’t move it. I couldn’t scream because I had punctured my lungs and broke my ribs, so I couldn’t make any kind of sounds. …”

After she was barely able to crack her car door — fueling the fire on the dashboard — Braxton came to the rescue.

Braxton said he panicked when he saw what had happened. “When I saw the fire, I said, ‘Oh, my Lord.’” He thought when he saw her at first that she was dead. “I dropped my phone and I went and opened the door and I told her, ‘Honey, I know you’re hurt, but I’ve gotta get you out of here.’ I said, ‘The car’s gonna burn up before the fire department gets here.’”

“I was very grateful for him, and he pulled me out of the car,” Wright said. Wright knew Braxton from seeing him at a store where she worked on Route 20.

Conscious the entire time, Wright concedes that she was scared.

Equally determined was Braxton, who received a standing ovation at the board meeting. Braxton, and later Sheriff’s Deputy Scott Folsom, pulled Wright from the burning automobile.

Without the thought of his own safety, Braxton managed to pull the door open, freeing Wright, Kidd said When Folsom arrived on scene, he found the “passenger’s compartment fully engulfed in flames,” Kidd added.

Wright credits Braxton for saving her life. “I would not be here today if it weren’t for Mr. Braxton. It’s no doubt in my mind.”

The plaque bestowed to Braxton commended him for his heroism and “his selfless act of valor that helped save the life of a fellow citizen” and called him a true asset to Buckingham.

“He’s a wonderful person,” said Wright. “Ever since this has happened, he has come by my house or called me at least once a week to see how I’m doing and just check up. …”

Braxton acknowledged that he was a hero after he received his award.

Longwood Avenue was closed to vehicular traffic late Tuesday evening. A fire truck was parked in the middle of the... read more