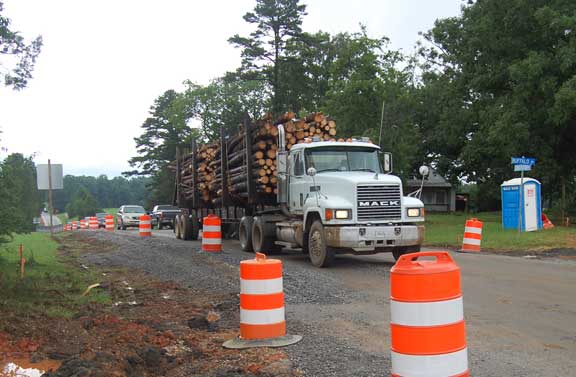 A tractor trailer loaded with wood slowly climbs the hill at the intersection of Troublesome Creek and Buffalo roads and Route 20 near Dillwyn, where the Virginia Department of Transportation is performing work to improve sight distance. See more photos of the project at www.farmvilleherald.com (Photo by Jordan Miles)

BUCKINGHAM — A small but heavily traveled portion of Route 20 north of Dillwyn will remain rough and unpaved until September as the Virginia Department of Transportation (VDOT) attempts to improve the sight distance at the intersection.

Currently, there is no asphalt on Route 20 at the intersection of Troublesome Creek and Buffalo roads, where VDOT is working. Dirt and gravel make up the section of roadway where vehicles travel up and down the hill at slow speeds.

“The intersection is located at the crest of a substandard vertical curve,” said VDOT spokeswoman Paula K. Jones.

She said the existing sight distance is limited for vehicles approaching the intersection from the east and attempting to turn onto Route 20.

The project’s contract was awarded to Haley, Chisholm & Morris Inc., of Earlysville, in February for approximately $1.19 million.

The project is expected to conclude by mid-September, according to Jones.

“As for the rough road, I know the project will be inconvenient during construction. There will be bumps, gravel surfaces and temporary inconvenience as the work progresses. We will take a look at the condition of the road and will try to keep things as smooth as possible, but we ask that the public bear with us for a short time as we work to improve the safety of the road for everyone that uses it.”
A separate project will see milling and paving on Route 20 from Route 15 to the intersection, said Jones. “Motorists may experience some delays during this work,” she said.

Katie Blackburn, who has lived on Troublesome Creek Road her entire life, says the intersection is very scary. “I think it’s great they are making improvements for everyone’s safety,” she said.

“It’s a mess for sure,” said resident Amanda Maxey, “but I’ve always been hesitant about turning onto [Route] 20 from [Route] 631, so I agree it is very limited sight and think it is dangerous for everyone, but school buses especially. I am looking forward to improvements on safety.”

Resident Deborah Steger acknowledged that the road at the intersection was a mess, “but that was an awesome idea because so many accidents occur and when the project is done, hopefully it will be a great change.”

PRINCE EDWARD — A formula of wet evenings and dry days has made for a successful school construction recipe. Progress... read more