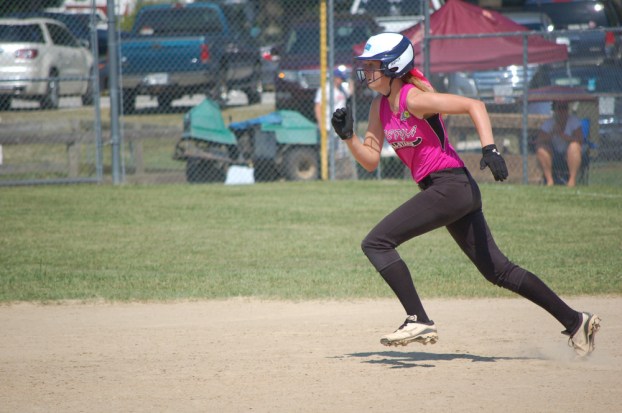 CREWE — Prince Edward-Farmville Youth Association (PEFYA) defeated Amherst 18-7 on Monday night in the Belles State Tournament, which advanced the team to the championship game on Tuesday night.
PEFYA was undefeated in the tournament up to Sunday, after taking a 20-2 win over Bedford on Friday and then a 12-5 win over Amherst on Saturday.
Crewe-Burkeville proved to be an early challenge, as they beat PEFYA 12-2 on Sunday evening. With the tournament being double-elimination style, PEFYA would have to fight to remain in the running for the state title
On Monday, PEFYA took on Amherst and showed its opponent that they were serious in securing a spot in the championship game. PEFYA started the game with runs from Lexi Marzloff, Taylor Thomas and Mary Grace Amos in the first inning. Amherst notched a run during that inning as well, and then another in the second.
The second inning saw PEFYA runs from Jaden Capati, Thomas, Amos, Hannah-Gray Schmidt, Jordyn Harris, Maddie Moreland, Emily Osborne and SaRoya Walton.
The next inning would slow down the pace of the game, while Amherst scored two runs and PEFYA none.
Amos, Shauneice Beasley, Schmidt, Gracie Hodges and Harris scored runs in the fourth. Then Thomas and Amos added two runs in the fifth, ending the game.
“Tonight we played really well. Mary Grace Amos hit three home runs and had seven RBIs,” said PEFYA Belles Manager David Schmidt. “The whole team played at the top of their game. This has been the best season we have had and the girls just love to play.”
With the Monday night win, PEFYA advanced to the championship round of the tournament on Tuesday, where they had to defeat Crewe-Burkeville twice to win the state championship. 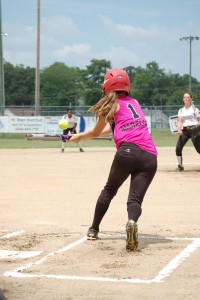 PEFYA’s Lexi Marzloff bunts the ball in a game against Amherst. (Photo by Hannah Davis)

PEFYA Comes Back To Defeat Amherst, 12-5