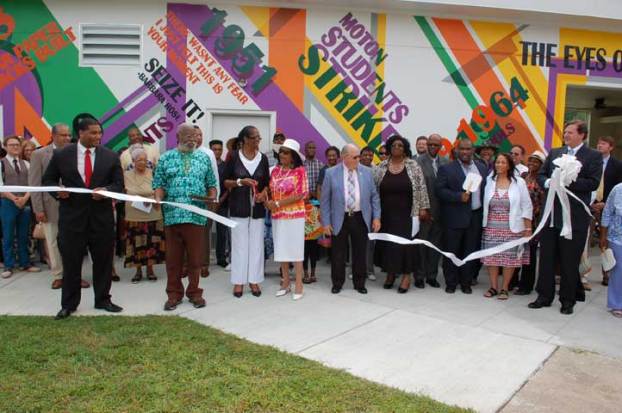 A large crowd attended Tuesday’s ribbon cutting for Robert Russa Moton Museum’s latest addition, a modern model of a tarpaper shack that existed in April 23, 1951. On hand to do the honors was Joy Cabarrus Speakes, from Moton’s Board of Trustees, and Joan Johns Cobbs, sister of the late Barbara Johns. (Photos by Rob Chapman)

On this day, Speakes was standing in the newest addition to what is now the Moton Museum, a model of sorts of one of those three tar-paper shacks. From Farmville’s Main Street, it has the look of the former structures, but this one has the amenities of modern convenience.

Today is the day for cutting the ribbon of this latest addition, and many from the community have gathered to join in the celebration.

The shacks and the overcrowded high school fueled the events of that April day when a group of African-American students walked out of their school to protest unequal facilities. What grew from that protest and the actions of others in the wake of that day led to the court case that ultimately reached the Supreme Court as part of the Brown decision declaring segregation in public schools unconstitutional.

Standing in the new structure, Speakes — whose image is painted on the wall among other children part of the Brown suit — says she is overwhelmed. She never thought the actions of that day would end up changing public education in Virginia and the nation.

“We’ve come a long ways, but we still have a long ways to go. And I hope that when the kids come and they see this mural that gives a timeline and everything that happened [on the outside of the building], that they will realize that they can make a difference,” Speakes said.

Some 40 educators from across the United States have come to share in the moment, as part of a National Endowment for Humanities program. And a representative from U.S. Sen. Mark Warner’s office extended the senator’s warmest greetings.

Funds for the project came from the Virginia Tobacco Region Revitalization Commission and the Virginia Department of Transportation Enhancement Program.

The addition will provide more educational, programming and community meeting space. One side of the structure is a mural timeline of events painted by Hamilton Glass, who met with individuals in the community prior to the work.

Glass said he hopes the project brings attention and “gives as much back to Moton as Moton’s given to me.”

Red Door 104 on Main Street in Farmville has new life and a new purpose. As the name suggests, color... read more