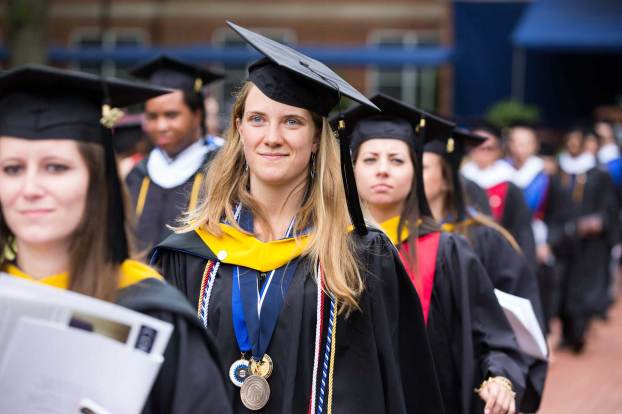 Longwood Does Community A Big Favor With Graduation Change

The simplest changes sometimes can have the most profound impact.

Such will be the case, we predict, with Longwood University’s decision to hold spring commencement exercises on a weekend separate from neighboring Hampden-Sydney College’s.  That would have happened regardless in 2016, under Longwood’s old method of scheduling graduation. But President W. Taylor Reveley IV announced last week that the university will continue in 2017 and beyond to graduate on a weekend later in May than Hampden-Sydney, which historically has tied its commencement to Mother’s Day weekend.

That collective cheer you heard resonate in the background was from the merchants of Farmville, who now will hear their cash registers ring twice during May.

Hoteliers especially will benefit, as spillover from the limited inventory of local lodging was going to Lynchburg, Blackstone and Richmond. With Longwood’s change, the 250-plus hotel rooms in Farmville will be filled for two weekends in May instead of one. Visiting parents and grandparents who stay in a local hotel are much more likely to eat their meals locally and check out a few downtown retail shops while in town.

The news also was welcomed by locals who historically have tried to stay far away from the madhouse that is Farmville on graduation weekend. Getting out and about should be much easier with fewer visitors in town on the same day.

Bucking tradition is a big deal for universities like Longwood with rich histories and customs that have served them well for many years, so we give credit to Reveley and his staff for their foresight and open-mindedness — and for putting the interests of the community ahead of the institution’s.

“After a good bit of conversation and deliberation, there is real wisdom in making ‘different graduation weekends’ a trend, and in 2017 our graduation will move a week further into May to ensure that our graduation and H-SC’s (which is in cycle with Mother’s Day) fall on different weekends,” Reveley wrote in a memo to faculty, staff and contract employees last week.

To which Prince Edward County Economic Development Director Sharon Carney responded with an assessment everyone in this community surely shares: “I think it’s wonderful — a Big Capital Wonderful.”