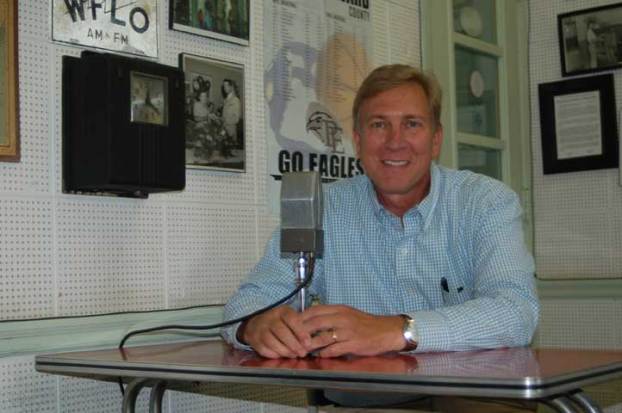 WFLO General Manager Francis Wood, pictured in this file photo from 2015, has worked at the station for more than 50 years in a variety of roles. He has been the station's general manager for 20 years.

FARMVILLE — Music brought Francis Wood into radio, but it was hometown radio that kept him there.

A familiar Farmville voice for the past 45 years, Wood has been honored with two major broadcasting awards. In June he received the Virginia Association of Broadcasters C.T. Lucy Distinguished Service Award, and in April Wood was inducted into the Virginia Communications Hall of Fame.

“For some reason 2015 was a big year,” Wood said. “Out of the blue I found out I was being inducted into the Hall of Fame. Then there was the C. T. Lucy Award — that’s a big award for broadcasters in radio and television.”

Wood explains his success in a radio career that spans 46 years in three words: “I love music,” he said.

Wood was 14 years old when he made his first foray into the world of broadcasting.

“In the fall of 1969 I was carrying newspapers in the little town of Lawrenceville,” Wood said. “I also played guitar in a little rock-and-roll band.”

Wood’s mother had heard about an opening for an afternoon DJ at a local radio station and encouraged her son to apply.

“The next day I went into the radio station and introduced myself,” Wood said. “The station manager gave me a thick book, FCC Rules and Regulations. He told me to go home and study it and then go to Norfolk and take a test. You had to pass the third-class operator’s license test to be on the air back then.”

Wood passed the test the following January, and he was on the air. Wood was, in fact, writing and producing commercials and radio programs before he could drive a car.

“In 1971 my father was transferred to Farmville with his job with VEPCO,” Wood said of the predecessor to Dominion Power. “I was still in high school, but I told my dad that I wouldn’t go unless he got me a job at the radio station in Farmville.”

Wood’s father did pay a visit to WFLO Station Manager John Wilson, who just happened to have an opening for an afternoon DJ.

“I sent John Wilson a demo tape — the old reel-to-reel — and he liked it,” Wood said. “John sent me a letter. I still have it, and he gave me the job.”

Wood, still in high school at the time, found himself immersed in the unique market that is hometown radio.

“I just embraced it; I really enjoyed it,” he said. “I love the small-market radio station. There’s an appeal to it. It’s hometown radio, and you really feel like you’re part of the community.”

Over the years Wood has had opportunities to move on to larger markets.

“I love this radio station,” he said. “I came in under this umbrella of really talented radio people: great mentors and radio pioneers, really. It was hands-on Radio 101, and I never missed an opportunity to learn from them. So I stayed.”

“I would show up at meetings where they were used to a reporter from The Farmville Herald being there,” he said. “All of a sudden there was this radio guy in the room. I will say this about Herald reporters — they really helped me out.”

Another new aspect of broadcasting was the live talk show. In 2000, after the passing of Gene Eike, who had started the Call FLO Show in the early 1970s, Wood stepped in to that slot.

“I was program director by then,” Wood said. “I brought in Elliott Irving, and we alternated as hosts for the morning talk show.”

“You have to be ready for anything,” he said. “Whether it’s someone who wants to talk about the weather or the Confederate flag, you have to talk to them.”

Wood, who became station manager in 2000 and general manager of Colonial Broadcasting Co. Inc. in 2001, is also active in the community. He has served on the Farmville Chamber of Commerce, the Heart of Virginia Festival Committee, the Moton Museum Board of Directors and Centra Southside Community Hospital Board of Directors.

In addition to serving in civic organizations, Wood is a Virginia Master Naturalist who continues to enjoy hiking, hunting, fishing and other outdoor activities. In addition, he is a well-known local storyteller and author of 27 books.

Wood served on the Virginia Association of Broadcasters Board of Directors and was VAB president for two years.

Of his recent honor from VAB and induction into the VCU Hall of Fame, Wood joked, “This has been a big year for me — I actually wondered if somebody thought I was going to die or something!”

The Virginia Communications Hall of Fame recognizes communication professionals with exceptional careers in advertising, journalism, public relations, new media and other media fields. Seven communications professionals were honored at this year’s award ceremony in April. Named for the founder of the VAB, the C.T. Lucy Distinguished Service Award honors a broadcaster who has become a leader in the state’s broadcast industry.

“The C.T. Lucy Award is a big award for broadcasters,” Wood said. “It’s an award by your peers for your longevity in the field, your contributions to the business and your involvement with your community.”

“Local radio’s strength will always dwell in the personal touch we give our listeners,” he said. “I call it hometown radio. No other medium comes close.”

FARMVILLE — It could take some time, but walkers, joggers and cyclists will have another option to stretch their legs... read more