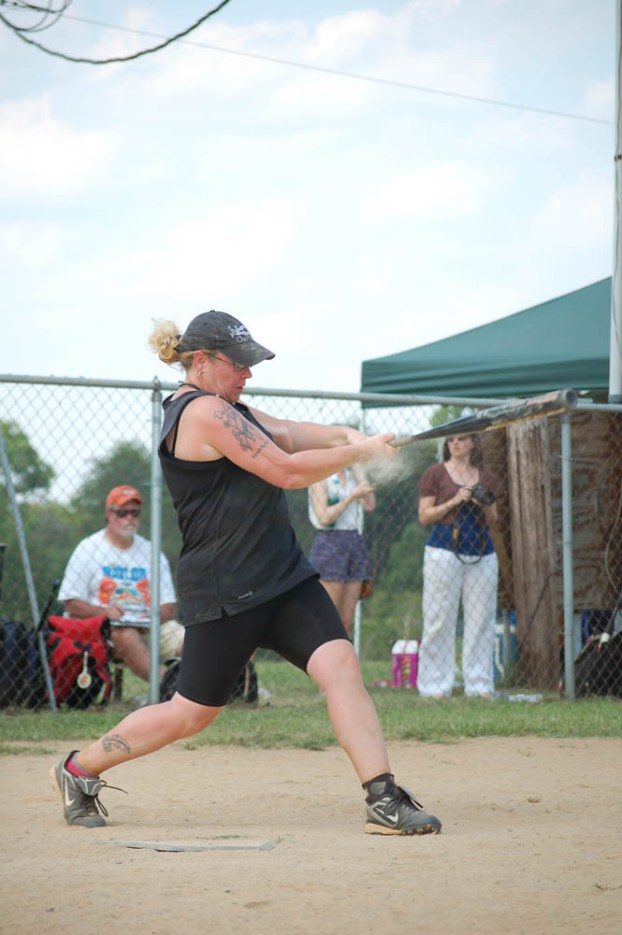 Go Getters player Ann Hamlett swings at a ball during the championship game on Sunday. (Photo by Hannah Davis)

The Hired Guns, from the Richmond area, won first place and went undefeated until the championship round.

The Go Getters, made up of employees from Buckingham Correctional Center and last year’s winning team, came in second, and the Farmville Volunteer Fire Department finished third.

Other teams that participated in the tournament were members from the Virginia State Police, Chesterfield County Sheriff’s Office and the Prospect Volunteer Fire Department.

The weekend began with eight games on Saturday, when teams tried their best to not be eliminated. Six games were held on Sunday to determine the winner of the tournament, and an exhibition game followed.

The defending champion Go Getters quickly put up a fight and defeated the Hired Guns 20-16 in the first game.

This was the Hired Guns’ first loss of the tournament, and Buckingham had to beat them twice to claim the championship title.

However, the Hired Guns returned in the second game to win 15-3.

The following exhibition game was playing by the Special Olympics District 12 softball team and a team made up of players from all of the tournament teams. Younger players also got to participate in that game.

“Personally, I think it was important to allow the youth to play that wanted to, as it will foster the relationship and awareness that we are trying to build in society today to pass on to future generations,” said tournament coordinator Kimberly Boettcher.

“The exhibition game was a good way to remind everyone of why they came out, which was to raise awareness and funds for Special Olympics and striving to become united as one community.”

After the games, trophies were awarded to teams that placed first, second and third. Medals were also given out to The Rednecks (Special Olympics team).

“We would like to thank all of the teams that participated, as well as volunteers and spectators,” said Boettcher.

“Without them, the event wouldn’t be possible.” 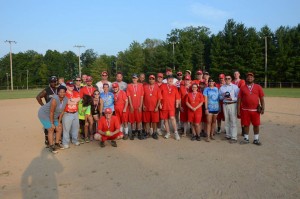 Participants who played in the Guns ‘N Hoses Softball Tournament gather together for a celebratory picture at the end of the exhibition game. (Submitted photo)