The entrance of the “Through the African American Lens” exhibition. (Photo by Michael R. Barnes, Smithsonian Institution)

From the back roads of rural Virginia, the story of Prince Edward County midwife Amanda Carey Carter has traveled to Washington, D.C. and the Smithsonian Institution. Carter, who served as a midwife in the Farmville area for more than 49 years, has been included in the Smithsonian’s newly opened exhibit, “Through the African American Lens.”

“Midwifery has been a highly respected occupation for many cultures,” co-curator of the exhibit Rhea Combs said. “It was important for us to showcase Amanda Carter in our exhibition ‘Through the African American Lens’ because Ms. Carter symbolized how this long-standing tradition was often passed down from one family member to the next.”

Combs will also serve as curator of film and photography at the Smithsonian’s National Museum of African American History and Culture (NMAAHC) set to open in 2016.

“Midwifery was an institution within the African American community that fostered support and service to others. Amanda Carter, like so many others, literally helped with the births of black and white babies despite racial segregation and other forms of oppression facing her. Her hard-work and dedication helped to develop and form community, and that is a tradition worth highlighting,” Combs said.

Carter’s journey from rural Prince Edward County to the exhibit halls of the Smithsonian is one she never expected to make. Carter, who passed away in 2007 at the age of 97, would no doubt be amazed to find her story featured in the Smithsonian. 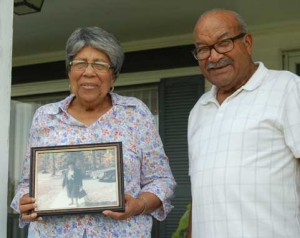 Fannie Silver holds a photo of her mother Amanda Carey Carter featured in the “Through the African American Lens” exhibit at the Smithsonian. She and husband Claude attended the private showing of the exhibit earlier this year in Washington, D.C. (Photo by Marge Swayne)

“Smithsonian museums receive thousands of visitors every day,” stated volunteer docent Claudia Silver. “According to the Smithsonian website, 1.8 million visits have been recorded for NMAH from January through May of 2015.”

The “Caring for the Community: Midwifery” display describes Carter’s role as a midwife in rural Virginia: “Midwifery has been for generations a highly respected and prestigious occupation among many cultures. Black midwives were often considered so skilled that families in the white community sought their services as well. In many instances the tradition was passed down from one family member to the next, as was the case with Amanda Carey Carter (1909-2007) of Farmville, Virginia. A third-generation midwife who served the central Virginia region for more than forty years, Amanda Carter learned the occupation from her mother Susie Carey (1879-1953). They both assisted with the births of black and white babies throughout the area.”

Silver, who lives on the family home place in Prince Edward County, remembers her mother going to deliver babies at all hours of the day and night.

“She would get calls in the middle of the night,” Silver said. “At that time my daddy would take her because they had a telephone then. Years ago before the telephone, they would come to the house and wait for my mother to get dressed — wake her up.  She would put on her white uniform and white shoes, and out she would go.”

Prior to 2005 when Virginia enacted new standards for midwives who were not nurses, midwives like Amanda Carter obtained their licenses from the Bureau of Vital Statistics. To obtain a midwifery permit in Virginia, the midwife was required to register with the local registrar, attend classes in safety and hygiene, provide one or more letters of recommendation from local physicians, agree to report all births within 10 days and promise to abide by 10 safety rules outlined in the Midwife Manual provided by the Department of Health.

Carter was justifiably proud of the midwife license she acquired in 1952. She made note of it in a speech she presented at Longwood University in the early 1980s: “I had experience of delivering one set of twins and approximately 500 Babies in fact my license will not expire until June 1985.”

“My mother delivered both black and white babies all over this area, even into Richmond,” Silver said.

Carter’s (handwritten) Longwood speech included this example: “One experience my mother had while a midwife, a white lady was traveling the muddy roads to the Dr. in horse & buggy a short distance from my mother’s house. A neighbor called my mother. My mother took a quilt and spreaded it on the ground on the road. She delivered the baby on the road.”

In those days, Silver noted, the midwife continued to care for mother and child after delivery.

“She used to go and see about the babies, too,” Silver said. “Sometimes my mother would take them a pie!”

The fee for the midwife’s services was negotiable.

“Some of them didn’t pay nothing,” Silver said. “Some would pay with eggs, butter or chickens. I never heard my mother say anything about a set fee.”

Before Carter accepted an expectant mother as a client, a pink card was required.

“Dr. Rawlins who was in Farmville would check the women out and see if the midwife could deliver the baby,” Silver said. “Then he would give the mother the pink card.”

These exams were also given at the Prince Edward Department of Health Clinic, according to a May 5, 1972, article in The Herald, also now a part of the Smithsonian exhibit.

“My mother had a book that I gave to the Smithsonian,” Silver said. “She had written down 365 names, but it was more than that. She had written the information down: mother’s name, father’s name, baby’s name, where they worked and all. She had a lot of those pink cards.”

Neighbors often noted when Carter left the house in her white uniform and shoes. That meant a baby was on the way.

“She also had a bag with her,” Silver said. “She had some towels in there and some baby clothes in case they didn’t have the proper things to put on a baby.”

The number of babies brought into the world by Amanda Carter is hard to say, but her daughter feels sure there are many. She recently met three of them.

“The Smithsonian drew three names of babies my mother delivered,” Silver said. “They asked me to contact them and get permission for their information to be in the exhibit.”

Fannie Silver and her husband Claude received an invitation to the private showing of the exhibit in Washington earlier this year.

“It was just so much there,” Silver said. “They had James Brown’s piano and the red jumpsuit he wore and many other things.”

“I was so excited,” Carter’s daughter said of the Smithsonian exhibit. “When I walked and saw it I said — there’s Mama!”

Silver’s enthusiasm is justified. While Amanda Carter’s journey is over, her story will continue for generations to come.

Through the Smithsonian’s Mid-Wifery exhibit, an often-overlooked chapter in African American history has been delivered. 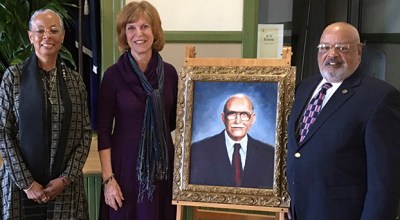