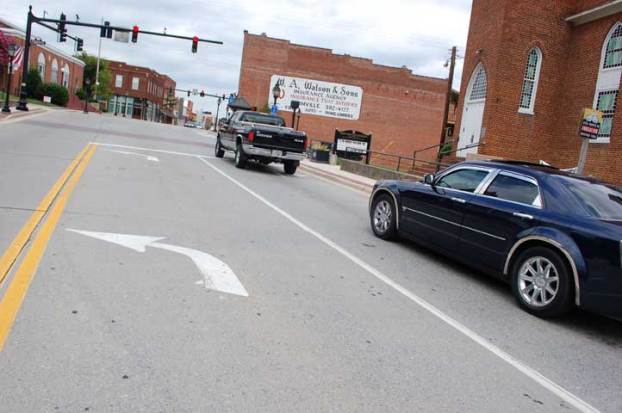 Motorist says he is confused when turning left off Main Street on to High Street. (Photo by Rob Chapman)

QUESTION: Is the left turn lane at Main and Fourth Street (northbound on Main) for turning into the little driveway directly across from Fourth? Or is it for turning left on High Street? Some cars get over early and some wait to get over. I’ve heard conflicting opinions on the matter. There’s no “left-turn only” sign at the intersection, but the painted arrow only shows a left-turn, not arrows for left or straight.

Good question. We reached out to the Farmville Police Department for the answer. Police, of course, have a handle on it since they enforce the traffic laws.

“Look at the markings on the pavement. The double solid line, that’s the dividing line between the north- and southbound lanes,” Farmville Police Lt. Bill Hogan advised.

“So if you’re headed north, then the turning lane to turn left onto High Street actually starts south of the Fourth Street intersection,” Hogan said.

The extended turning lane has been in place for a number of years, but there is that little driveway into the Federal Building at the Fourth Street traffic light that gives some motorists pause.

While there is some confusion on when motorists should get over, one problem officers have seen is motorists traveling south on Main Street crossing the double yellow line and using the northbound lane as a turning lane to enter Midtown Square.

“So what they’re actually doing is they’re sitting in oncoming traffic,” Hogan said.

He offered this rule of thumb: As long as you keep the double yellow lines on your left, you’re OK.

“Now if you’re traveling and you find a double solid line on your right, you’re in the wrong lane,” Hogan said.

Have a question you would like our staff to answer? Email us at youasked@farmvilleherald.com and we’ll do our best to find the answer.