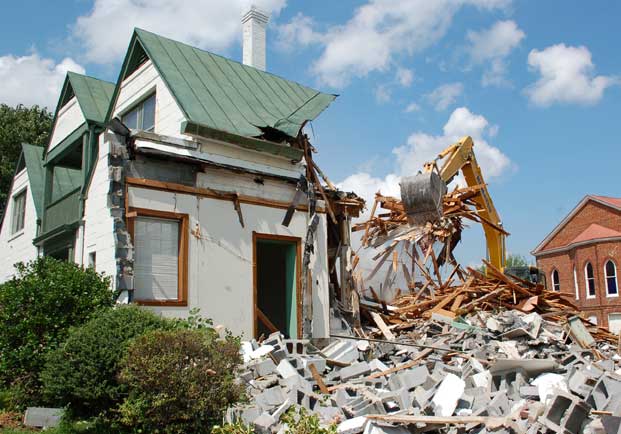 The Doyne-Burger-Davis Funeral Home building on Farmville’s Venable Street was demolished Monday. The building was purchased by Longwood University’s Real Estate Foundation, and the vacated space will be temporarily used for parking. (Photo by Rob Chapman)

FARMVILLE — A bright yellow Komatsu bucket pulled and smashed cinderblocks to rubble Monday. The 1938 green and white building at 106 Venable St. that had sheltered grieving families for decades as Doyne-Burger-Davis Funeral Home was exhaling its last few breaths.

“It was a bittersweet thing when I sold it,” said Sylvia Davis, who had pulled her car into the parking to witness the demolition. “But now, I have to stand here and watch it go down. It’s sad. It’s sad for it to go down.”

All she can think about at the moment, Davis said, is the many days she walked through it. Still, she concedes, it was time. Longwood University’s Real Estate Foundation purchased the site and will use it for parking until the university’s master plan determines a best use for the site.

“The University is keenly aware how important this site is to eventually physically linking Longwood and the Farmville community,” said Louise Waller, foundation director, in an email response forwarded to The Herald.

Time and progress both march on like the cogs in the Komatsu’s tracks.

The funeral home was born in 1838 on Farmville’s Main Street and operated by the Doyne family through multiple generations. The Venable Street building was constructed in 1938, and Sylvia and Francis Davis were the first owners outside of the Doyne family when they purchased it in 1993. Francis passed away just over 10 years ago and Sylvia, 74, kept it going until Oct. 15, 2014, when Doyne-Burger-Davis ceased operation. Sylvia said she knew the building would be demolished when she sold it, though the moment doesn’t appear that easy. The business part was sold to Puckett Funeral Home, Sylvia said.

Sylvia, reflecting on the Apostle Paul’s writing to the Philippians, said she is content in whatever state. And she will stay busy. She makes jewelry and goes to some 30 shows a year. Plus the longtime music teacher is also considering teaching piano lessons.

She thinks of the good staff members. It is a day where past, present and future intersect in memories, realities and plans.

By day’s end the building has been leveled and passersby on Venable Street have a view through to the back of the African Methodist Episcopal Church not seen in 77 years.

Change is life’s constant. Today’s demolition is proof, again, that even the longest lasting of things are not eternal.

Three out of four legislative candidates appearing on the November ballot in The Herald’s coverage area are on track to... read more