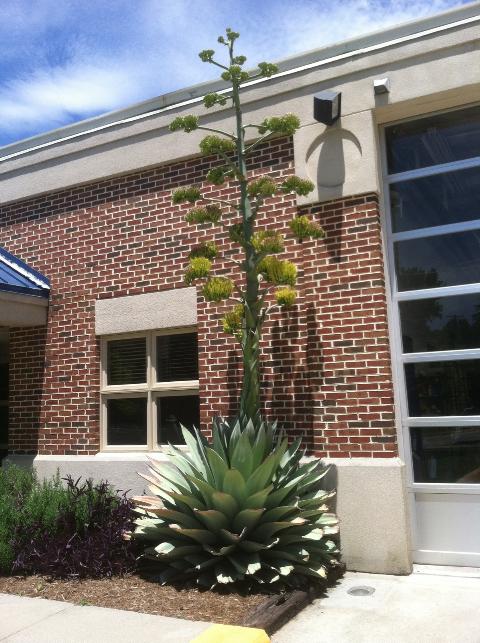 An agave plant, like the one in front of the Farmville Volunteer Fire Department, can take up to 50 years to bloom. (Photo by Travis Finch)

Blooming Agave Is Once In A Lifetime Event

If you have driven past the Farmville Fire Station in recent weeks perhaps you noticed a very unusual plant growing next to the front of the building. That plant is an agave. In this case, Agave ovatifolia or Whale’s Tongue Agave.

First of all, it is rare to see an agave growing here in Central Virginia. Agaves are typically desert plants and often prefer warmer winters than we experience. Some species tolerate cold winters, but only if the soil and air are dry. Only a few will survive and grow well in our winters that are both cold and wet. Agave ovatifolia (Whale’s Tongue Agave) is one of these. It is native to the mountains of northeast Mexico.

Second, it is even more rare to see an agave bloom in Central Virginia. For an agave to bloom it must grow for a few years, in some cases up to 50, in order to build up enough bulk and energy to produce a bloom spike. The Whale’s Tongue Agave will grow about three feet tall, three to six feet wide, and will have a bloom stalk 10 to 12 feet tall with clusters of greenish-yellow flowers. The reason this is a once in a lifetime event is that agaves are monocarpic. This means that the plant dies after it blooms and sets seeds. In addition to reproducing by seeds, many agaves also multiply vegetatively by producing offsets, smaller plants connected to the “mother” plant. When the “mother” plant blooms and subsequently dies, the offsets continue to live and grow until they in turn bloom. Agave ovatifolia does not produce offsets. It grows as a solitary plant and reproduces only by seeds that cost the parent plant its very life.

Like most agaves, the one at the Farmville Fire Station is armed with vicious spines (most of which have been removed for safety reasons) at the tips of the leaves and also with vicious barbs along the edges of the thick, gray, succulent leaves. This particular specimen was planted by Farmville’s Town Horticulturist in June 2007 and steadily grew until this year it had finally built up enough energy to bloom – once in a lifetime.