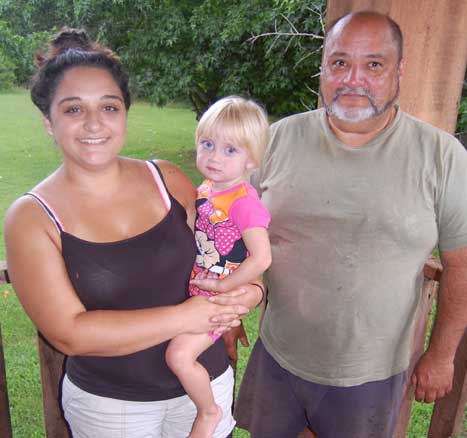 Andrea Swick smiles while holding her 2-year-old daughter Mia alongside Mark Prieto, Swick’s father, who was able to resuscitate Mia after she became unresponsive in their swimming pool in late June. (Photo by Jordan Miles)

CUMBERLAND — Andrea Swick met her ultimate fear literally face-to-face a few weeks ago as she saw an open door, her swimming pool and her 2-year-old girl nowhere in sight.

But, the near-tragedy resulted in a miracle thanks to the quick actions of Swick and her father saving the little girl’s life.

When Swick saw her back door wide open after not hearing Mia for a few minutes inside the house, she immediately thought about the 4-foot-deep pool. “My worst nightmare,” she said as Mia sat beside her on the couch watching Mickey Mouse on TV.

“It was around one o’clock … I was actually about to put her down for her nap,” Swick said, sitting beside her father, 51-year-old Mark Prieto. Her husband, Christopher, had just left for work, and Swick and her two other daughters, Alexia and Summer, along with Mia, were cleaning up the girls’ rooms.

“I went and I locked the door behind them and we just carried on back in there to pretty much clean the rooms,” she said, recalling the events of the afternoon.

Earlier, Swick had put the ladder in the above-ground pool with plans of swimming later in the day.

“I didn’t pay any mind, because in my mind the door was locked,” she said, explaining that they were cleaning in an effort to soon get into the pool, which sits behind their house.

After a few minutes of cleaning, she noticed that Mia wasn’t in the room helping anymore.

“I didn’t hear [her] for a minute or two and when it gets quiet, everyone knows when you have kids that’s not a good sign unless they’re asleep.”

That’s when Swick walked into the kitchen and saw the open door, and ran outside to the pool.

“[Mia], unfortunately, was in the pool. So, I just jumped in. I grabbed her. At the current moment she was unresponsive,” Swick said.

Swick screamed out to her father, who came running. She handed Mia to him to hold as she returned to the house to call 911.

“I freaked out. That’s my kid. In my head, my kid’s gone,” Swick said, adding that her daughter Alexia also thought Mia was dead.

After calling 911, Swick rushed back outside. That’s when Prieto began to call for Swick.

“She became responsive,” said Swick. “Dad doesn’t know CPR. I do, actually. But, because I guess it’s your own child, you don’t really think at that moment, I suppose. It scared me.”

Life was back in Mia’s eyes.

Immediately, Prieto, Swick and her three daughters jumped into the car and rushed to Centra Southside Community Hospital in Farmville.

“She threw up water three times on the way there,” Swick said, noting that as soon as the toddler became responsive, her first words were “Papa,” referring to Prieto.

“So, she knew physically who he was and right then we kind of knew everything would be OK,” she said.

When asked how she felt when she saw Mia responsive, Swick replied, “I had my kid … I don’t really know. I just wanted my kid OK.”

Staff at the hospital told Swick that Mia couldn’t have been in the pool for more than three minutes, enough time for her to sink to the bottom and return to the top.

As soon as her husband got home he drained the pool, she said.

“It was a miracle,” Prieto said. Swick agreed.

Mia’s grandfather said that more people need to know how to perform CPR in case of emergencies, such as the one Mia was involved in.

While Swick said she considered her dad a hero, Prieto disagreed. “I only see one hero in this room. She’s my hero,” he said, referring to Mia.

Mia doesn’t remember anything, said Swick, who called the incident the scariest moment of her life.

Swick offers advice to parents, adults and guardians with children who go near or get into water: always have someone else present, know CPR, have proper safety equipment and don’t have a pool unless it’s fenced in and with a gate that can be locked.

“Anything can truly happen,” she said, adding that she watches her girls like a hawk. “That never crosses your mind at first because you don’t think that could ever happen.”

Swick said she doesn’t know what she would have done if she had lost Mia.

“I’m not worried about anything else. I’m just happy she’s here. That’s my kid,” she said.