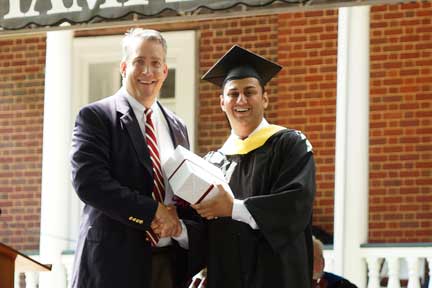 On Sunday, May 10, Coach Dee Vick, head basketball coach, was recognized at Commencement with the Senior Class Award. This award is given annually to a member (or members) of the college’s faculty, administration, or staff who, in the eyes of the class members, has contributed during their four years most significantly to the College, its students, and the community.

Vick received his B.A. in psychology from the College in 1994 and has just finished his seventh season as head coach at Hampden-Sydney. He has strong experience as a Division I and Division II coach and, over the years, he has led the Tigers in impressive runs through the ODAC Tournament.