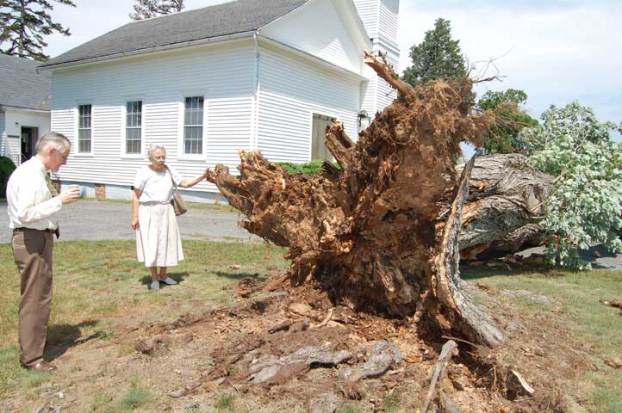 Strong winds toppled this approximately 100-year-old maple tree in Buckingham on Saturday evening as fierce storms traveled across the area. Ned May and Betsy Samuels, members of the Emmanuel Episcopal Church at Glenmore, examine the 50-foot tree. (Photo by Jordan Miles)

Thousands of people across Buckingham, Cumberland and Prince Edward counties lost electricity following a lengthy round of evening storms on Saturday.

The storms not only downed trees but took down wires and poles that provide electricity for homes across the area.

According to Dominion Power spokeswoman Janell M. Hancock, during the peak of the outages, about 3,200 customers in the Farmville area experienced an outage. She said the utility’s Farmville service area includes parts of Prince Edward, Nottoway, Cumberland, Amelia, Buckingham and Appomattox counties.

The Farmville area was one of the utility’s hardest-hit regions from the storm, she said.

According to Southside Electric Cooperative’s Allan Sharrett, at the peak of the outages 1,584 customers were without electricity in Prince Edward, 625 in Cumberland and 20 in Buckingham.

According to Central Virginia Electric Cooperative’s Gregory Kelly, about 1,300 customers were without power system-wide at the peak of the outages. The outages were concentrated in Buckingham, Prince Edward, the Cartersville area and Fluvanna, he said, adding that those areas were the “hardest hit.”

“The pattern was unusual in that there was a lot of wind damage and it wasn’t just one big outage … It was scattered outages and a lot of broken poles, which take four to six hours to repair …,”  he said.

As of Tuesday morning, all outages had been restored.

According to Sarah Elam Puckett, Prince Edward County’s emergency management coordinator, the county had numerous trees down across roadways after the storms.

Kevin Flippen, Buckingham’s Emergency Management Coordinator, said that he received 13 reports of downed trees — most of them in the northern end of the county. There was one report, Flippen said, that a tree fell onto a home, “causing significant damage.”

According to the Cumberland County Sheriff’s Office, 24 trees fell across roadways during the storm.