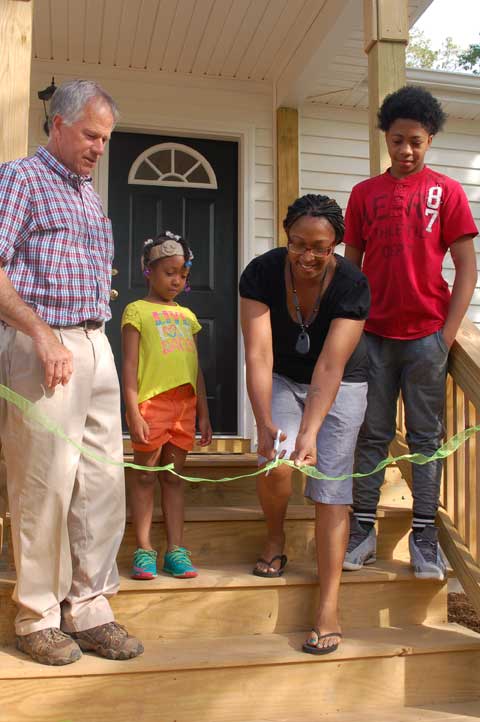 And Shelanda Harris, whose Habitat For Humanity-partnered home was dedicated recently, is grateful for the boost of help that the organization and the community has shown her and her family.

“I’m just excited. That’s all I can say. I’m just excited,” the first-time homeowner said, standing on top of newly planted grass under a large shade tree outside of her new home.

Harris told The Herald that she had a good feeling about owning her own home.

The feeling is mutual between the homeowner and the Buckingham Build Committee of the Farmville-based organization.

The home, constructed by volunteers throughout the county and contractors, is the first of three planned for the corner of Conner and Culbreth streets in the town of Dillwyn. Efforts to build the home began in August 2013, and a groundbreaking ceremony followed about one year later.

As Harris and her two children, Ja’Ziyah, 5, and Octavious, 14, stood holding hands in the yard before the dedication, members of the Buckingham Build committee and other volunteers and neighbors, who held numerous car washes and other fundraisers to help make the home a reality, shook hands and hugged each other.

“It’s a blessing…It’s just a blessing,” Dillwyn Mayor Linda Venable Paige said emphatically when asked about the new home. “I keep saying it. We’re just so grateful they’re [helping] revitalize the town. We’re looking forward to the other ones coming.”

While praying with the large number of people encircling the home, John Moxley, the pastor of First Baptist Church in Dillwyn, noted that while there may be many houses in Buckingham, “…I pray that you would bless it to make it a home,” he asked.

“The perfect one-liner for this house is a Russian proverb,” explained Buckingham Build leader Chris Yates, “It says ‘Pray, but keep swimming to shore,’” sharing a line that he read recently. “That’s this, right here.”

Yates, standing on the front porch, told the crowd that the beautiful thing about the house was the perseverance, togetherness, and gratitude volunteers offered to the project. “And, that’s why this happened here. This has been a labor of many, many hands…People showed up and helped out.”

He called it a community effort, adding that the area would be a neighborhood of habitat homes.

The colorful plants surrounding the house were donated and planted by the Buckingham County Garden Club—just one of the numerous area civic and church groups that volunteered.

“You’ve worked so hard,” Jayne Johnson, executive director of the Farmville Area Habitat For Humanity, said to Harris as she presented her with a key to the home atop the wooden steps.

“It has been inspiring and heartwarming to see this community come together and build this home,” Johnson would later add. “Shelanda had been in our program two years, and it really took the community coming together and making it work. We couldn’t make it happen from Farmville.”

She said Yates was a big part of the effort, noting that before his presence the organization didn’t have the right combination of people for building in Buckingham.

Harris’ new home is the second Habitat For Humanity has constructed in Dillwyn.