It’s been a while since I visited New Orleans to graze my way through some of the best food in the world. Fortunately, I have friends who’ve lived there and regularly treat me to their home cooked gumbo and jambalaya, southern comfort food at its best.

Jambalaya and gumbo are tasty combinations of the French, Spanish, Portuguese, and African influences that converged in Louisiana. Are Cajun and Creole cooking different? Yes, somewhat. Creole food is generally considered more refined, city food; it often uses a wider array of spices. Cajun food is country food, a flavor free-for-all, based on a narrower range of ingredients. How are Cajun and Creole jambalayas different? Cajun ones use a roux made of browned flour and oil, while Creole ones omit the roux and include tomatoes. Some gourmands say that tomatoes, and perhaps oregano (an Italian influence), are the only real difference between Cajun and Creole cooking. No matter. It’s all divine.

Both Cajun and Creole cuisines are built on the holy trinity of onions, bell peppers, and celery (rather than the onions, peppers, and carrots of the classic French mirepoix), plus a handful of herbs, including basil, garlic, parsley, sweet bay, and oregano. With some planning, you can grow most of these basics in your garden and have the makings of an impromptu feast on hand whenever you feel the urge for comfort food.

Cajun/Creole kitchen herbs don’t require much space. They’ll be equally happy whether planted in a vegetable garden, in pots, or even tucked into empty spaces in the perennial border. Globe basil, parsley, and oregano will also grow indoors in a sunny window.

Purchase young herbs and plant them outdoors after danger of frost is past. With the exception of parsley, plant herbs in full sun in average to rich loamy soil and add a layer of mulch. Plant parsley in partial shade to protect it from harsh midsummer sun. Keep plants watered during dry periods and apply a light application of fertilizer in early spring and again in midsummer. Too much fertilizer, however, will promote weedy growth and dilute essential oils. Herbs aren’t particularly susceptible to insect pests, but both aphids and spider mites can be troublesome. Just spraying the infected plants with water usually gets rid of these insects.

The best time to harvest herbs is early in the morning when the concentration of essential herbs is high. To help herbs produce new growth as quickly as possible, cut sprigs so that just a bit of new growth remains.

Both sweet and hot peppers require essentially the same growing conditions as herbs and will thrive in the perennial border, the vegetable garden, or pots. Plant peppers in a sunny location in well-drained, loamy soil and provide even moisture throughout the growing season. They are sensitive to sudden drops in temperature, so the best time to plant them is several weeks after tomatoes. Don’t over fertilize them or the plants will produce lots of foliage, but not much fruit.

If you can grow herbs and peppers, then onions and garlic will be easy. Plant both in early spring in rich, loamy soil. To grow both green onions and bulb onions, plant onion sets 1 to 2 inches apart and several inches deep. Thin the plants as they grow and use the tiny plants in salads. For garlic, separate a head of garlic into individual cloves. Plant the cloves 4 inches apart and an inch deep. Both onions and garlic are heavy feeders and should be fertilized at planting and again in several weeks. Green onions are ready for harvest when they are still small and the entire plant can be eaten. Bulb onions are ready to harvest when the foliage begins to die. Pull the onions from the ground and put them in a shady place to cure for several weeks. Garlic is usually ready to harvest in August. Follow the same procedure for digging and curing as for onions.

Growing sweet bay (Laurus nobilis) for its intensely aromatic leaves requires a different approach. Sweet bay is a tall Mediterranean tree that is only hardy to zone 8. The solution is to plant sweet bay in a pot that can be moved outdoors during warm weather and then taken inside when the weather turns frosty. It prefers rich, well-drained soil and doesn’t like to dry out between watering. It can be pruned to maintain a relatively compact size.

Only the leaves of sweet bay are used in cooking. Harvest the largest ones as they are the most aromatic and let them dry for several days. Freshly harvested leaves are bitter. Be sure to remove sweet bay leaves from food before serving; the spines are quite sharp and potentially dangerous if swallowed.

By planting just a few of these basic herbs and vegetables, you’ll have a bounty of flavors on hand, ready for whatever culinary adventure you have in mind. Enjoy. 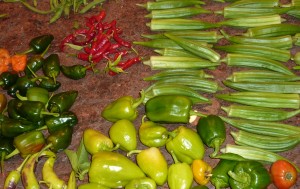