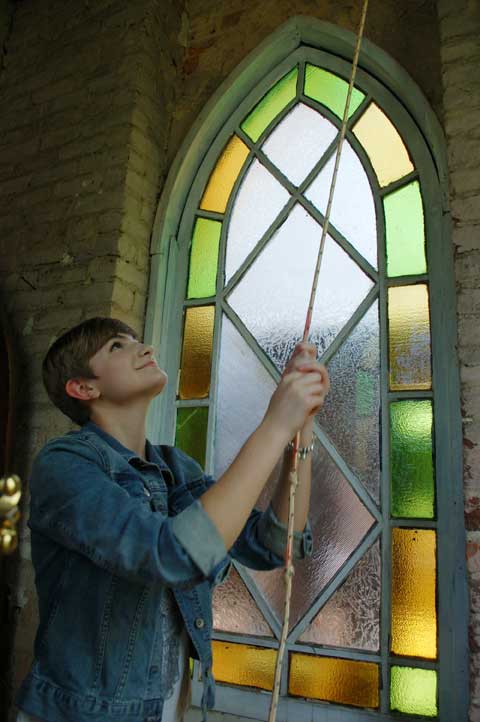 Ellie Swanson, of Farmville, was among those who participated in the bell ringing at Johns Memorial Episcopal Church in Farmville on Friday. (Photo by Rob Chapman)

FARMVILLE — One by one, the names were read.

Charleston, S.C., is six hours from Farmville, but there are ties that span time and distance and denominations.

Nine people were killed by a gunman last Wednesday in Emanuel African Methodist Episcopal (AME) Church, and the hurt reverberated in communities across the country, even here at Johns Memorial Episcopal.

Bishops United Against Gun Violence had asked churches across the country to ring their bells for 10 minutes Friday — one minute for each victim, and one for the soul of the man charged with the crime.

“Precious God, we give thanks for the life of your precious servants, and we pray that you receive them into your kingdom. Be with those who mourn their loss this day, be with their families, their friends, the community of Charleston and for all of those throughout the country and throughout the world who mourn their loss, their death. And, Lord, be with the family of the one [who] perpetrated this terrible crime and for the one who committed the crime,” prayed The Very Rev. Dr. Nancy Meck. “Lord, open their  hearts. May they feel your love this day and may all of us be ever mindful of the needs, the mental health needs of others, to be aware of the racism that still exists in this world and the gun violence that plagues our streets and our homes. Lord, open our hearts to be wise, to be intentional and to never forget the lives that have been lost, that we may go forward in Your name seeking peace and justice and showing mercy to all of Your children throughout the world.” 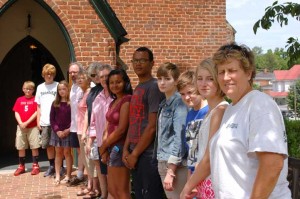 There was a line gathered Friday afternoon in front of Johns Memorial Episcopal Church in Farmville to ring the bell in recognition of the victims in Charleston’s Emanuel African Methodist Episcopal (AME) Church shooting. (Photo by Rob Chapman)

The Episcopal Diocese of Southern Virginia was among the many that had asked for prayer for Charleston.

“Given the fact that the AME Church is historically rooted in our own Episcopal Church, I believe this event should be a wake-up call for all of us. I strongly encourage all parishes in the Diocese of Southern Virginia to be diligent in assuring that conversations are taking place on the local level around these serious social matters. I likewise encourage our parishes to be part of consciousness raising efforts that lay these matters before our respective local governments for the purpose of seeking solutions.”

He asked for prayer for the victims, Charleston, the perpetrator and for all of those throughout the world who suffer from acts of violence.

A group of mostly parishioners — black, white, young, young at heart — took turns at the physically demanding job of ringing the bell in the small room in the corner of the church.

Over the weekend, more prayers were sent up, and Tuesday evening, the community was invited to Beulah AME Church on Farmville’s Main Street for a community prayer service in response to the shooting at its sister church in Charleston.

“I feel it’s important to have a service like this so that we can stand in support of the community of faith and, also, mourn with the families of those who were lost,” the Rev. Matthew Shannon said. “And offer some kind of encouragement to those families.”

While the two churches share a denominational background, this event is open to the community. The historic building with a second floor sanctuary dates to 1900, but the church was established in 1868.