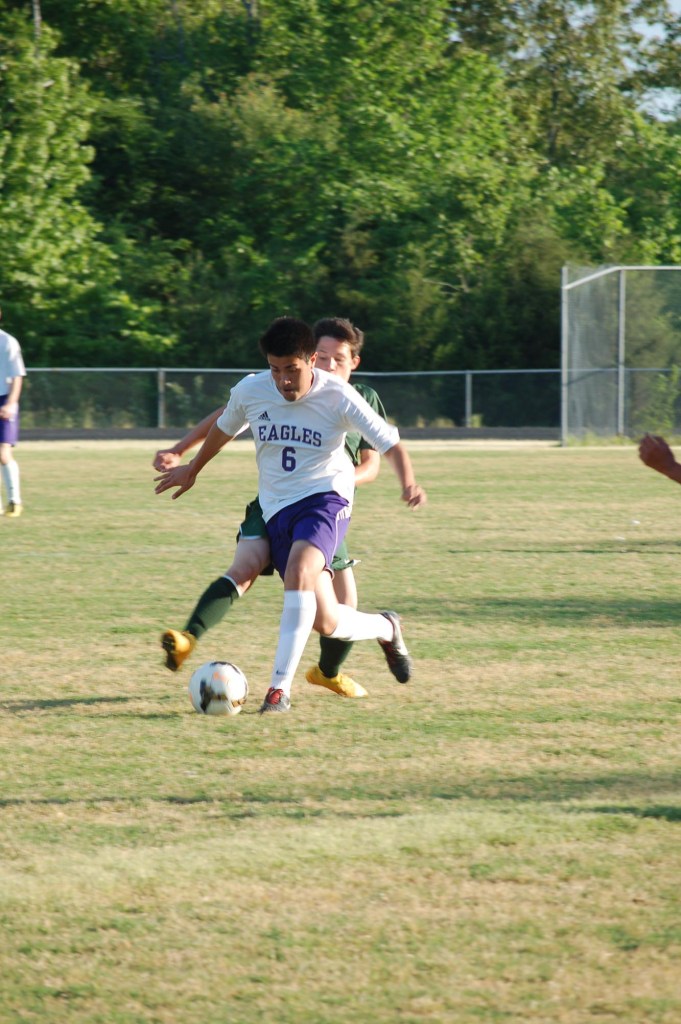 FARMVILLE — Despite lightning and a downpour as the game started, the Prince Edward County High School varsity boys soccer team returned after the storm settled and defeated the Maggie Walker Green Dragons 2-1 after a round of sudden death on Monday, June 1, in the first round of the VHSL 2A East Region Tournament.
The team had advanced to the region tournament after defeating the Goochland High School Bulldogs 2-0 the Quad Rivers Conference 34 championship game on Thursday, May 28.
“After a 44-minute delay (during Goochland’s game), both teams took the field to finish out the rest of the conference match. With six minutes left in the first half of play, Malte Carolus took a pass from mid-fielder Niko Reinson and ripped a shot from 20 yards out that took a deflection, and ricocheted into the back of the net for the eventual game-winning goal,” PECHS varsity soccer coach Devin Pierce noted.
Colton Sheehan would rally in the second half to score the Eagles final goal on a free kick. Robin Schneider and Reinson finished the night with an assist each.
Their game against Maggie Walker began the same way, with a lightning delay. Both teams did not manage to score in the first half, but stepped up their game later. PECHS’ Bryce Dietrich scored the Eagles first goal on a header off of a corner kick by Reinson. However, Maggie Walker was quick to retaliate with a goal.
The game remained tied at the end of regulation and went into overtime, then double overtime. With the score still 1-1 at the end of double overtime, the game went into sudden death.
The Eagles sealed their win with a Sheehan goal, assisted by Craig Burns.
PECHS improves to 19-0 with the win and advances to the VHSL 2A East Region Tournament semifinals. They will host the winner of the George Mason/Wilson Memorial quarterfinal game on Wednesday, June 3, at 6 p.m.