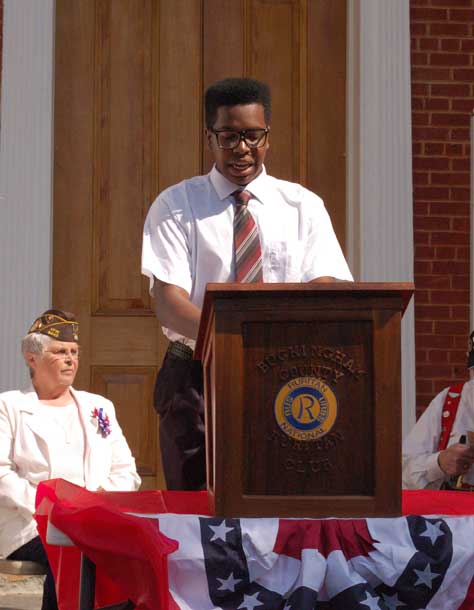 Eleventh-grader Ja’Mir Smith shares his team’s research on the late William Aubrey Scott, who died while defending the United States in the Korean War. Smith is one of hundreds of Buckingham County High School students who have documented the over 70 names on the county’s war memorial since the early 2000’s.

The 16 Buckingham County High School 11th-grade students who researched five of the county’s fallen heroes are to be commended.

For more than 10 years, BCHS English and history students have been selecting soldiers who died serving our nation and exploring their backgrounds, families, personal and professional lives, and their military experiences — and presenting them at the Buckingham Ruritan Club’s annual Memorial Day Observance.

Just as William Scott, Walker Mann, Fred Crow, Harry Murphy and Charles Hartwell—this year’s researched soldiers who paid the ultimate sacrifice fighting for American liberties—followed in the footsteps of thousands of veterans and fallen heroes, the 16 English students followed the path that history students cleared for them in the early 2000s when the research began.

After working with and being led by some of Buckingham’s finest teachers, students have documented and researched all 70 names etched on the war memorial on the courthouse grounds.

But, more important, the students put a face on — and brought life to — the men by working in small teams and poring over documents online, in libraries and in school archives, and by sitting down with their families and listening to their stories.

“This process has allowed us to know the individuals who answered their country’s call and made the ultimate sacrifice,” the event’s program explained.

Even though all of the names have been researched, the incoming 11th-graders aren’t going to throw down their pencils and books and call it a day.

Instead, they’re going to compile the pages of data and facts into a book, which will unify the hard work they’ve done, making it available to not just those living in Buckingham but to the entire world to see and read.

It’s a momentous project that future English students will have a hand in through editing, formatting and assembling. It’s also a feat upon which every student who has researched one of the soldiers will leave a lasting impression.

Just as each of the former students has carried a part of the soldiers’ lives with them through their own, this book will carry the names and the lasting legacy of their individual contributions of bringing life and breath to Buckingham’s fallen heroes.

No honorable deed could better recognize these honorable men.