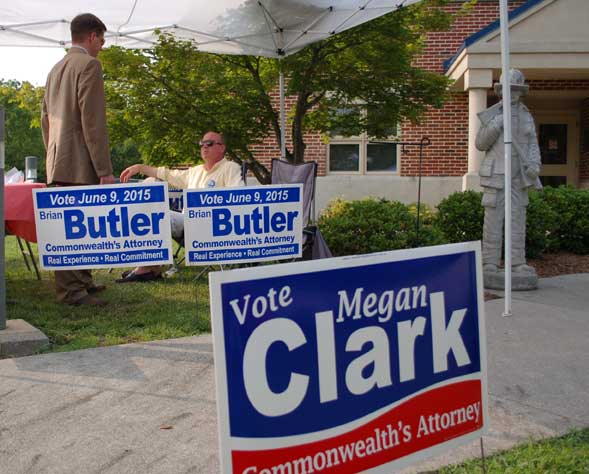 Signs dotted polling sites in Prince Edward County Tuesday and candidate supporters were out in force for the Democratic Party primary. Turnout, at around 19 percent, was relatively light as commonwealth’s attorney candidate Megan Clark won the right to be on the November ballot over challenger Brian Butler. Farmville District 801 voters also chose incumbent County Supervisor Pattie Cooper-Jones to be the party’s representative in November for that seat on the Prince Edward Board of Supervisors. (Photo by Rob Chapman)

PRINCE EDWARD — One hundred and thirty-seven votes separated Megan Clark and Brian Butler Tuesday, but it was more than enough to win her a spot on the ticket as the Democratic Party’s nominee in the November general election for commonwealth’s attorney.

“I have told people, and I had continued to say I was prayerfully optimistic …,” Clark told The Herald Wednesday morning. “Brian is a well-respected prosecutor here, and I knew that it was going to be very difficult because of that and because he works here and so I tried to remain realistic and calm the whole way through, and I just said I can only do my best and as long as I did that, then I said I will be … happy at some point with whatever the results may be.”

Collectively, 2,503 voters participated in the Democratic Primary, or roughly 19 percent of the nearly 13,000 eligible voters. Clark won five of the 11 polling sites (including the central absentee precinct), registering the biggest margin in the Prospect District, where she won 301-134. (See table for complete results.)

Clark’s primary win brings her a step closer to a historic milestone. The 2001 Prince Edward County High School graduate’s name will be the only one on the November ballot, putting her well on the road to becoming the first African-American and woman, as well as the first Prince Edward County High School graduate, to serve as the County’s commonwealth’s attorney.

“It … sort of is hitting me in waves that this is even really happening,” she said when asked if she had a sense of history or felt the history of the moment. “But I do. I did not campaign on, nor will I ever campaign on, my race or my gender, but it’s not something I can ignore either. I wanted people to see me for my personality, for who I am on the inside and for what it is that I stand for and what it is that I can bring to the table. And so I’ve made a conscious decision not to … mention those things, but then I do at the same time realize that I’m the first female and first African American and both of those things mean a lot to me, especially being from Prince Edward and knowing the history of this county.”

Clark, a 2004 Longwood University graduate and a 2008 graduate from the Marshall-Wythe School of Law at the College of William and Mary, serves as an assistant commonwealth’s attorney for Henrico County. Clark said it was “incredibly difficult” campaigning locally while working in Henrico. There’s an hour-and-a-half commute each way, court cases every day and campaigning until 9 in the evening each day.

She could not identify one specific thing that made the difference for her, but said she “really had good people in my corner who gave me advice that I can’t even put a value on and who were willing to work with me in reaching out to people and knocking on doors as well.”

“I don’t know,” Butler, the current Prince Edward chief deputy commonwealth’s attorney, said Wednesday morning about where he plans to go from this point. “I’m considering my options now, not gonna make any decisions at this time.”

Butler said he contacted Clark Tuesday night and congratulated her and told The Herald he ran a campaign that he is “proud of,” and “pleased I got as many … votes as I did. Of course, was disappointed I didn’t get more …” 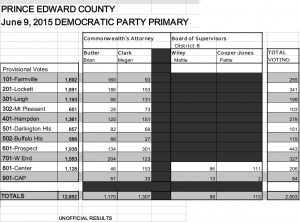 While turnout was light in the District 801 contest — with 206 voters (not including absentee ballots) of the roughly 1,130 eligible registered voters going to the polls — the outcome was a familiar one: a close contest with Cooper-Jones winning 113-99. The two had battled it out in the previous two elections, each taking a turn in the seat and launching unsuccessful write-in campaigns.

“It was a grueling day — it was a busy day — but I truly thank God for the victory,” Cooper-Jones told The Herald. “And I appreciate all the support of the constituents in my district.”

Wiley said Wednesday she was somewhat disappointed in the results.

“I am going to continue to be an advocate for the citizens of Prince Edward … on or off the board,” she said.

At this point, Wiley said, she has no plans for a write-in campaign, “but we don’t know what’s down the line.”

Tuesday primary date also coincides with the filing deadline for the November election for independent candidates. The list of candidates to appear on the ballot was officially set at 7 p.m.

Four of Prince Edward’s eight board of supervisors’ seats are up this year. Farmville District 101 supervisor and current board Chairman Howard Simpson and Lockett District representative Robert M. “Bobby” Jones, who are running as Democrats, are running unopposed. Two candidates, however, will vie for the Hampden District seat to replace retiring representative Charles McKay: Democrat Odessa Pride and Independent Richard Altice.