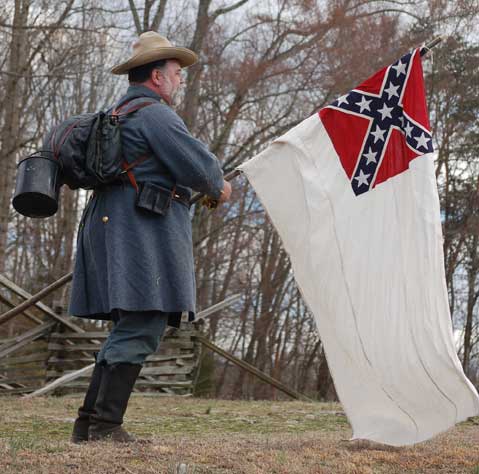 Living historians participated in a tactical demonstration at Sailor’s Creek Battlefield Historical State Park earlier this year. While it was a re-creation of the last major battle of the Civil War, the modern-day public display and sale of the Confederate flag has been a subject of discussion and debate across the country in recent days. (Photo by Rob Chapman)

Some view the Confederate flag as a symbol of hate.

Others see it as a symbol of heritage.

Richmond was the capital of the Confederacy, and Virginia was also the place where a divided nation reunited at Appomattox on April 9, 1865.

Today, the battle lines are being redrawn over a remnant from that era. Major retailers, following the fatal shooting of nine people at a Charleston, S.C., church last week, have discontinued sale of the Confederate flag and merchandise on which is it depicted. Virginia’s governor is also taking steps to ban vehicle license plates that feature the flag.

What do area residents think? We reached out to several on Wednesday, and also sought feedback on Facebook, where a majority were opposed to banning the flag.

“[The] Confederate Flag is a symbol of dark time in this country’s history when you had brother fighting against brother,” said Buckingham resident Jan Tyree. “This country needs to be united as one no matter what race you are.

Banning the Confederate flag is not [going] to stop the people’s attitudes.”

Tyree said the nation needs to do more to change people’s attitudes so that future generations will rid themselves of racism.

Others said the flag needs to go.

“We have always been opposed to the flying and displaying of a Confederate flag other than in a museum,” James Ghee, President of the Prince Edward branch of the NAACP, told The Herald.  “We have not believed that it represented anything but hatred and suppression. We are in total agreement with the governor in having it removed from future license plates in the commonwealth. We believe the business world is correct in their decision not to sell them or display them in their businesses.”

Farmville Presbyterian Church minister Tom Robinson, whose great-grandfathers fought for the Confederacy, believes Virginians should put the flag in a museum and leave it there.

“…Public view, I mean it just raises the hackles on our African-American brothers and sisters and why do we want to insult them? Why do we want to raise up that stuff again? I mean, we need to move into the future. We need to live in the present, move into the future … just leave that thing alone,” said Robinson, who was speaking only for himself and not his congregation.

Robinson still has his great-grandfather’s diary and the picture of him in his Confederate uniform.

“Fine, you know, family heritage and all that, but that doesn’t mean … I want to wave that thing in front of the faces of folks who have been deeply offended by all that it symbolizes,” he said. “I want to be respectful of people and especially folks in the community whom I have a high regard for. I want to move on.”

Robinson believes that removing the flag from retail stores is the easy part. Tougher is “addressing the racism that lurks deep within our souls and calling into question that and saying, ‘OK, what is it about me that looks down my nose at somebody who’s different than I am, and how do I address that in a way that lifts up the integrity and respect of all human beings?’ That’s a tougher issue.”

One doesn’t achieve that from a governor’s decree, he’s convinced.

“Each of us,” Robinson said, “needs to search our souls for that one.”

The commander of the local Sons of Confederate Veterans camp believes the flag is a scapegoat.

“It is unfortunate that the Confederate Battle Flag has been used by various groups who perpetuate racism and hate,” wrote Chuck Ironmonger, commander of the SCV’s High Bridge Camp, in response to The Herald. “It is also true that these same groups display the U.S. flag, [and] should we ban that as well?”

Ironmonger, speaking for himself and not the group, noted that businesses are “private property and those decisions should be up to the owner and/or management. In the case of license plates and state property, it should be left to the people of the state via a referendum. But, regardless of how this all plays out, this cannot be disputed: Banning the Confederate Battle Flag and passing all of the gun restrictions our president would like to have in place would not have prevented the tragedy in Charleston, nor will these actions prevent any similar events in the future.”

Ironmonger added that the world is “unfortunately filled with evil and evil people, and you can’t legislate evil out of the world.”

There will be no business garbage or cardboard collection in Farmville on Friday, July 3 in advance of the July... read more