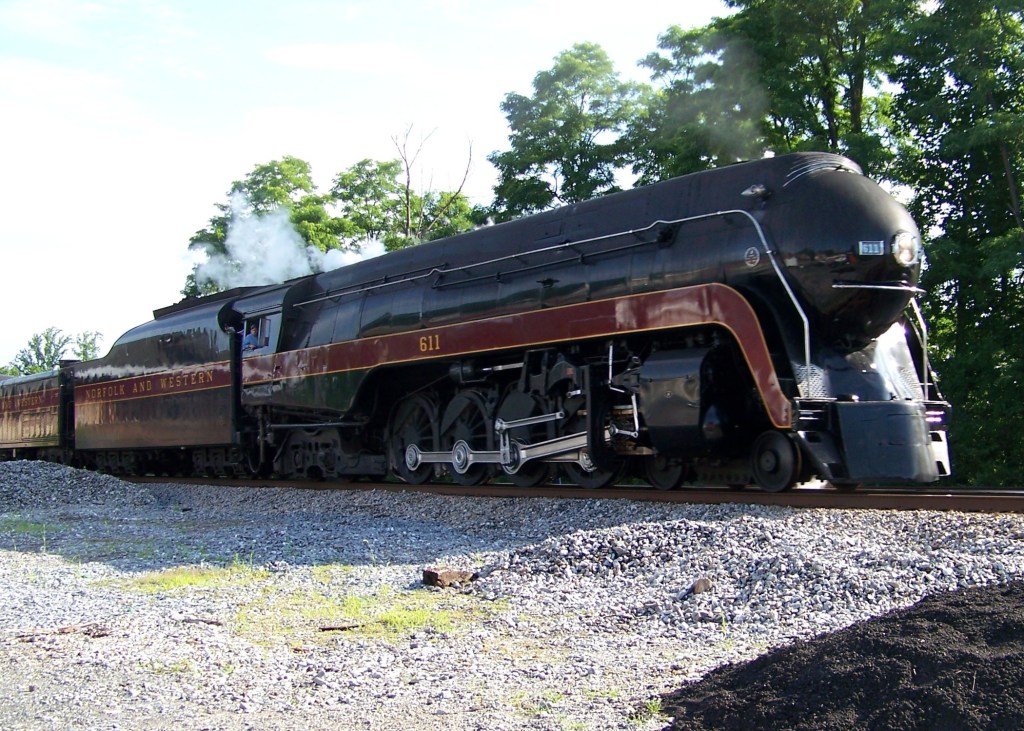 A crowd begins to gather along the rails at the Pamplin Depot waiting for the Cavalier Excursion pulled by the recently refurbished Norfolk & Western J611 engine.  Older citizens will remember when the Tuscan red striped, bullet nosed J engines powered the famous Powhatan Arrow, Pocahontas, and Cavalier trains from Norfolk to cities in Ohio.

“It was thrilling to be riding the same train and being pulled by the same engine that I used to take from Norfolk to Cincinnati when I was stationed aboard an aircraft carrier anchored in Hampton Roads, Virginia, in 1953,” says US Navy veteran Frank Snider to his new found friends Hugh and Carolyn Dolan, of Pamplin, after their ride together on the Cavalier Excursion pulled by the legendary Norfolk & Western Class J No. 611 steam engine.

When Kevin and Erica Foster, of Pamplin, were asked what was their most memorable moment on the ride, Erica replied, “It would be hard for me to pick just one, so I’ll narrow it to a choice few – I loved spotting our friends along the way, and seeing all the creative ways folks got into position to capture those ‘moment in time’ shots.  We saw several people on ladders, but the winners for the highest overhead shots probably go to Blackstone’s fire department, they had a couple of crew members in the bucket on their ladder’s aerial.”

The Norfolk & Western Engine Class J611 steam engine pulled the Cavalier Excursion through the local countryside from Lynchburg to Petersburg on Saturday and Sunday, June 13 and 14.  According to Kevin Foster, the J611 pulled one tender that held coal over top of a water tank; one tender just as a water tank; one mail car that housed all the crew, mechanics, and supplies; 19 passenger cars, one with concessions and one gift shop car.  The passenger cars were made up of standard coaches, deluxe coaches, first class cars, a dome car and an observation car on the rear.  There were over 800 passengers on both the Saturday and Sunday trips.

Through Blue Ridge Public Television, Nancy Carwile, of Madisonville, was lucky enough to win tickets for the Sunday excursion for herself, her husband C. L. Carwile, her brother Gene Ramsey, and Catherine Garnett.  Seated in first class, she recalls that the staff and volunteers did their utmost to keep everyone fed and comfortable.  She was amazed at the number of people who lined the tracks, standing at crossings, and in private yards and fields.  She believes that seeing the train go by is just as exciting as riding it.

Nancy, as well as the Dolans and Fosters, remarked about the smoothness of the ride.  The cars were so well insulated that the track noise and engine whistle could not be heard unless the doors were open as people moved between the cars.  There was some jarring as the train started from each stop as the slack came out of the car linkage.

Erica Foster observed that the rhythm of the ride was similar to a rocking feeling.  With a smile and a twinkle in his eye, Jim Stump, vice chairman of the Fire Up 611 Committee chided the passengers, “This is not a Pullman Car!  No sleeping, no napping…at least not before lunch.” Carolyn Dolan said, “After eating an amazing lunch at Petersburg in the farmers market (sponsored by the rail museum members) and it got warm, I wanted to sleep.  But I didn’t dare to blink an eye.  I did not want to miss a thing.” There were a few stops, some planned as at Crewe for crew change, and some unplanned such as passing freight trains or a downed tree on Saturday which caused the track alarms to go off.  Observers who were at these locations were able to get those perfect camera shots while those of us who were at Pamplin and other places had to chance the shot as the train rolled by at 40 miles per hour.

Hugh Dolan remarked that he recognized a multitude of people between Spout Spring and Crewe.  He enjoyed the “amazement of the Amish children in Charlotte County who had probably never seen a steam engine before.” Erica Foster observed that the train photographers and chasers “wanted to be there [along the tracks] and they were genuinely excited to be a part of capturing the journey.” Hugh Dolan commented that he enjoyed chasing the train on Saturday.  He actually got more of the feel and excitement because he could see the steam and smoke and hear the whistle and the clickety clack of the wheels and the rails, and feel the vibrations as the J611 rolled passed with her entourage of cars.

Erica Foster reflected, “When we got off the train in Petersburg for lunch, we were met by Kevin’s Aunt Marie and Uncle Joe, who surprised us by coming to meet the train.  We went and enjoyed lunch with them at one of the area’s lovely restaurants.  But aside from our modern day clothes, I don’t think there’s any better way to celebrate the nostalgia and romance of riding the rails than to take a trip and be greeted by friends and loved ones when you step off the train or see you safely off as you leave the station and resume your journey.”

The Prospect Volunteer Fire Department Auxiliary meatloaf supper will be Saturday, June 20, from 5 p.m. to 7 p.m.  Cost is a donation at the door.  The meal will include meatloaf, mashed potatoes, green beans, bread, drinks, and desserts. The Kitchen Light Community Dinner will be on Thursday, June 25, from 5:30 p.m. to 7 p.m. at Glenn Memorial Baptist Church in Prospect.

The Glenn Memorial Senior Adult Ministry will host their senior meal on Friday, June  26, at 6 p.m.  Bring a covered dish or two and a friend to enjoy an evening of good food, fellowship, and musical inspiration with Allen Cooper.

Edith Vaughan has recently returned after spending some time in Northern Virginia.

“Being a great father is like shaving.  No matter how good you shaved today, you have to do it again tomorrow.” – Reed Markham